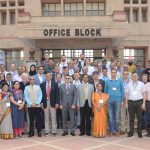 Written by adoody on December 6, 2019. Posted in Event

Fifty delegates from across the globe recently gathered at the 7th International Cereal Nematode Symposium in New Delhi, India to discuss the spread of cereal nematodes, strategies to lessen their impact on crops and ways to boost international collaboration on research.

The International Maize and Wheat Improvement Center (CIMMYT) and the Turkish Ministry of Agriculture and Forestry have been working over the last 12 years —  in collaboration with the International Center for Agriculture in the Dry Areas (ICARDA), national program partners, and research institutions in Australia and Europe – to understand the importance and distribution of these species of cereal nematodes, as part of the ICARDA-CIMMYT Wheat Improvement Program (ICWIP).

“Because cereals are the staple food for the majority of the world’s population, cereal nematodes pose an enormous threat to global food security,” said Abdelfattah Dababat, leader of CIMMYT’s Soil Borne Pathogens Program.

“The symposium allows scientists from around the world to share their findings, lessons and strategies to combat this threat.”

The symposium, organized by ICWIP and hosted by the Division of Nematology at the ICAR- Indian Agricultural Research Institute (IARI), was held November 3-6 at New Delhi’s National Agricultural Science Complex. The conference was inaugurated by Dr. Trilochan Mohapatra, Director General of ICAR & Secretary DARE, Government of India. It included sessions on the global status and distribution of cereal nematodes, their economic importance and population dynamics, management strategies both with and without using host resistance, the genomes and parasitism genes of cereal nematodes, and the use of molecular tools for cereal nematode research.

Among the notable global developments shared, highlights included the following.

Trilochan Mohapatra, Director General of ICAR & Secretary Dare, and Arun K. Joshi from CIMMYT’s India office were among the other distinguished speakers.

Following the symposium, participants observed nematode-related research work underway at IARI’s Division of Nematology, the largest nematology center in India. They also visited the IARI museum and the institute’s Division of Entomology.

Symposium supporters include CIMMYT, the CGIAR Research Program On Wheat, the Indian Council of Agricultural Research (ICAR), the Borlaug Institute for South Asia (BISA), the Indian Agricultural Research Institute (IARI), the Republic of Turkey’s Ministry of Food, Agriculture and Livestock, Corteva, Syngenta, and the Plant Breeders Union of Turkey (BISAB). Previous symposiums have been held in Turkey, Austria, China and Morocco.