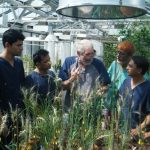 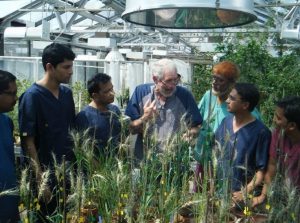 With backing from leading international donors and scientists, nine South Asia wheat researchers recently visited the Americas for training on measures to control a deadly and mysterious South American wheat disease that appeared suddenly on their doorstep in 2016.

Known as “wheat blast,” the disease results from a fungus that infects the wheat spikes in the field, turning the grain to inedible chaff. First sighted in Brazil in the mid-1980s, blast has affected up to 3 million hectares in South America and held back the region’s wheat crop expansion for decades.

In 2016, a surprise outbreak in seven districts of Bangladesh blighted wheat harvests on some 15,000 hectares and announced blast’s likely spread throughout South Asia, a region where rice-wheat cropping rotations cover 13 million hectares and nearly a billion inhabitants eat wheat.

“Most commercially grown wheat in South Asia is susceptible to blast,” said Pawan Singh, head of wheat pathology at the International Maize and Wheat Improvement Center (CIMMYT), an organization whose breeding lines are used by public research programs and seed companies in over 100 countries. “The disease poses a grave threat to food and income security in the region and yet is new and unknown to most breeders, pathologists and agronomists there.”

As part of an urgent global response to blast and to acquaint South Asian scientists with techniques to identify and describe the pathogen and help develop resistant varieties, Singh organized a two-week workshop in July. The event drew wheat scientists from Bangladesh, India, Nepal and Mexico, taking them from U.S. greenhouses and labs to fields in Bolivia, where experimental wheat lines are grown under actual blast infections to test for resistance.

The group then traveled to Bolivia, where researchers have been fighting wheat blast for decades and had valuable experience to share with the colleagues from South Asia.

“Scientists in South Asia have little or no experience with blast disease, which mainly attacks the wheat spike and is completely different from the leaf diseases we normally encounter,” said Prem Lal Kashyap, a scientist at the Indian Institute of Wheat and Barley Research (IIWBR) of the Indian Council of Agricultural Research (ICAR). “To score a disease like blast in the field, you need to evaluate each spike and check individual spikelets, which is painstaking and labor-intensive, but only thus can you assess the intensity of disease pressure and identify any plants that potentially carry genes for resistance.”

After the U.S.A. and Bolivia, the South Asia scientists took part in a two-week pathology module of an ongoing advanced wheat improvement course at CIMMYT’s headquarters and research stations in Mexico, covering topics such as the epidemiology and characterization of fungal pathogens and screening for resistance to common wheat diseases.

The knowledge gained will allow participants to refine screening methods in South Asia and maintain communication with the blast experts they met in the Americas, according to Carolina St. Pierre who co-ordinates the precision field-based phenotyping platforms of the CGIAR Research Program on Wheat.

“They can now also raise awareness back home concerning the threat of blast and alert farmers, who may then take preventative and remedial actions,” Singh added. “The Bangladesh Ministry of Agriculture has already formed a task force through the Bangladesh Agricultural Research Council (BARC) to help develop and distribute blast resistant cultivars and pursue integrated agronomic control measures.”

The latest course follows on from a hands-on training course in February 2017 at the Wheat Research Center (WRC) of the Bangladesh Agricultural Research Institute (BARI), Dinajpur, in collaboration with CIMMYT, Cornell University, and Kansas State University.