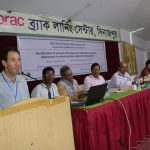 Bangladesh leads the way in global fight against wheat blast

Wheat blast is a fast-acting and devastating fungal disease that threatens wheat production and food security in South America and South Asia. The disease, which originated in South America and first appeared in Bangladesh in 2016, can by dispersed by wind across large distances and spores can be seed borne. There is deep concern among scientists that the disease could spread further across South Asia. A 2018 ex-ante analysis found that in Bangladesh, India and Pakistan wheat blast could potentially cause losses of 0.89 – 1.77 million tons each year, with 7 million hectares of growing area at risk.

The project, funded by the Australian Centre for International Agricultural Research (ACIAR) addresses wheat blast in Bangladesh and South Asia through the identification of new sources of resistance genes for wheat blast and development of wheat blast resistant varieties. The germplasm, genes and markers, and genetic information developed through the project are shared with South Asian national wheat breeding programs and other researchers, finally ending up in farmers’ fields as resistant varieties.

The review meeting was chaired by BWMRI Director General Israil Hossain, and featured remarks by Bangladesh’s Additional Secretary of the Ministry of Agriculture Kamala Ranjan Das.

“This project has over-delivered on its milestones,” said Eric Huttner, ACIAR Research Program Manager and lead of the review. “It’s very likely that the project will reduce the risk of blast on wheat production in Bangladesh.”

Early impacts in terms of research capacity and infrastructure are very clear:

Meeting attendees emphasized the urgency and importance of the project, which is set to conclude in 2021, in the battle against a fast-moving and devastating disease.

As Huttner told attendees, “Now the resistant or tolerant materials need to be efficiently deployed for breeding high-performance wheat varieties that reach stakeholders as early as possible.”

The Identification of sources of resistance to wheat blast and their deployment in wheat varieties adapted to Bangladesh project is funded by the Australian Centre for International Agricultural Research, with Bangladesh Wheat and Maize Research Institute and the National Institute of Agricultural and Forestry Innovation as key partners. More information about the project can be found on the project factsheet.