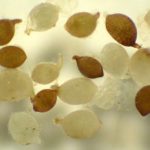 Soil borne pathogens (SBPs) are microorganisms that thrive in the soil and attack cereal crops, notably wheat. They cause high yield losses and reduce grain quality and quantity. SBPs include nematodes, a kind of round worm — including the Heterodera species of cereal cyst nematode and Pratylenchus species of root lesion nematodes — and crown rot caused by the Fusarium species, all of which attack roots of cereal crops.  Drought and monoculture farming exacerbate this damage.

Although chemical, biological and other options can be used to keep pathogen population levels low, the most environmentally friendly and biologically effective method of control is through a resistant crop variety.  However, up to now, only a few resistance genes have been identified against the cereal cyst nematode, Heterodera filipjevi, and this resistance is not yet present in high yielding cultivars.

For nearly 20 years, research to fight these pathogens has benefited from a productive collaboration between the International Maize and Wheat Improvement Program (CIMMYT) in Turkey and Washington State University (WSU) and the U.S. Department of Agriculture’s Agricultural Research Service (USDA-ARS) in the United States through a fellowship program named after CIMMYT founder and Green Revolution pioneer Norman Borlaug. CIMMYT wheat breeders in Turkey have been working with breeders in Pullman, Washington to find stronger resistance genes to cereal cyst nematodes identify pathotypes, and other research areas that strengthen both CIMMYT and WSU wheat breeding programs.

CIMMYT pathologist and Turkey Country Representative Abdelfattah Dababat has been working with WSU and USDA-ARS since 2010. Dababat, who joined CIMMYT as a postdoctoral student studying soil borne pathogens (SBPs) in 2009, recently spent two months in Pullman as a Norman Borlaug International Agricultural Science and Technology Fellow, sponsored by the U.S. Department of Agriculture’s Agricultural Research Service (USDA-ARS). There he was able to share CIMMYT work with members of the WSU Department of Plant Pathology, USDA-ARS, exchange ideas with well-known pathologists, and even travel to Cleveland, Ohio to attend the meeting of the American Phytopathological Society.

“My experience at WSU has been productive and inspiring.” said Dababat. “I have learned from some of the best minds in plant pathology, and worked on SBP issues that plague farmers both in my region and theirs.

“I would like to thank CIMMYT, especially Dr. Hans Braun, for the opportunity to obtain this great fellowship visit to WSU.”

The CIMMYT-WSU relationship was strengthened when the two institutions collaborated on a proposal for an Ethiopian PhD student at the University of Ankara, Turkey to work on SBPs. Through the sponsorship of a Borlaug Leadership Enhancement in Agriculture Program (LEAP) scholarship, Elfinesh Shikur Gebremariam spent four months at WSU in 2013-14 to learn about molecular aspects related to crown rot diseases. She published three peer-reviewed papers in high impact factor journals.

Timothy Paulitz, a research plant pathologist with USDA-ARS and an adjunct professor in WSU’s Department of Plant Pathology has also been an active member in this collaboration, contributing to two master classes on soil borne pathogens in cereals at CIMMYT’s Turkey research station.

“Dr. Paulitz has made tremendous impact in our region,” said Dababat. “He trained more than 50 young scientists who are now in a high scientific and or managerial positions and are contributing not only to their own food security but also to international food security.”

CIMMYT screens hundreds of wheat germplasm lines each year against SBPs at its research station in Eskisehir, Turkey, in collaboration with the Grain Research Development Corporation of Australia. Using association mapping, CIMMYT researchers have been able to identify new sources of resistance to cereal cyst nematodes, and many new lines have been approved as moderately resistant to resistant compared known varieties.  As a result, hundreds of lines of winter and spring wheat germplasm moderately resistant to SBPs are available.

Cereal cyst nematodes (CCN) are a persistent problem, however. Among the most damaging nematode pests to small grain cereal production, CCN are common from the Middle East, North Africa and Central Asia to the Pacific Northwest of the U.S. These nematodes alone are estimated to reduce production of crops by 10% globally.  Breeding for resistance is difficult because breeders must use live nematodes to phenotype, or measure, the lines, and there are few molecular markers linked to the resistance genes against the major CCN species to help identify them.

However, CIMMYT research — involving targeted genetic exploitations, classical selection breeding of resistant genotypes discovery of quantitative trait loci (QTLs) associated with resistance genes, as well as recent genome-wide association studies (GWAS) to associate nematode resistance or susceptibility with particular regions of the genome — has seen some success. One important source for disease-resistance genes is found in wheat’s wild relatives.  So far, 11 resistance genes have been reported. Nine of these were transferred into common wheat from its wild relatives (like Aegilops or goat grass, and other Triticum species) to enhance resistance against the H. avenae species of nematode.

Recently, CIMMYT and the University of Bonn, Germany performed GWAS on 161 winter wheat accessions and identified 11 QTL associated with resistance against the H. filipjevi species of nematode. These QTLs were intercrossed into susceptible winter wheat germplasm and the first generation material (F1) along with the parents were sent to WSU as part of the Borlaug fellowship.  CIMMYT and WSU also conducted several surveys in countries including Azerbaijan and Kazakhstan to detect SBPs in cereals.

This joint research will help both institutes to find stronger resistance genes to the cereal cyst nematodes.

The Washington State-based part of Dababat’s Borlaug fellowship is drawing to a close, but the collaboration and relationship between the two institutions remains. In June of next year, Paulitz will visit him in Turkey to follow up on his research progress.

“The international collaboration between CIMMYT and WSU shows how much progress we can make when we work together,” said Dababat. “I look forwarding to continuing our partnership to help farmers around the world find resistance to SBPs.”