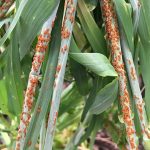 Breakthrough in the battle against Ug99 The emergence of the Ug99 race of stem rust in Africa and the Middle East together with the appearance of new strains in Europe catalyzed a major effort to identify new sources of stem rust resistance and breed these genes into wheat lines. However, the continued emergence of stem rust variants that overcome new resistance genes, now demands an increased focus on pathogen evolution and virulence mechanisms.

Numerous stem rust resistance (Sr) genes are known and in recent years several of these have been cloned and used to develop so-called ‘perfect’ markers to allow more rapid and accurate breeding. These genes typically encode immune receptors that recognize specific protein components of the fungal pathogen to trigger resistance. However, the molecules recognized by these Sr genes have been unknown until now, hampering our understanding of how new strains of P. graminis f. sp. tritici evolve to escape plant recognition.

New insight into this evolution came from the identification of the protein, AvrSr50, which is recognized by the wheat Sr50 resistance gene, by  an international collaboration led by Dr. Peter Dodds (CSIRO Food and Agriculture and University of Minnesota Adjunct Professor) and Professor Robert Park (University of Sydney and Director of theAustralian Cereal Rust Control Program) and involving teams in the UK and the US.