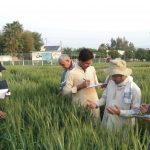 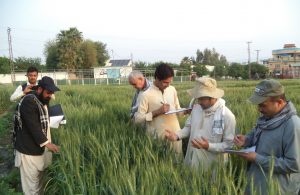 With generous funding from the Australian Centre for International Agricultural Research (ACIAR) over the last 15 years, Afghanistan research organizations and the International Maize and Wheat Improvement Center (CIMMYT) have helped supply Afghan farmers with improved varieties and farming practices to boost production of maize and wheat.

“As of 2012, the start of the most recent phase of ACIAR-funded work, Afghanistan partners have developed and released 12 high-yielding and disease resistant bread wheat varieties, as well as 3 varieties of durum wheat, 2 of barley and 3 of maize,” said Rajiv Sharma, a senior wheat scientist at CIMMYT and country liaison officer for CIMMYT in Afghanistan.

Sharma spoke at a workshop, which took place on August 28, with partners from the Agricultural Research Institute of Afghanistan (ARIA) of the country’s Ministry of Agriculture, Irrigation & Livestock (MAIL). The event was organized to review accomplishments and facilitate MAIL’s takeover of all activities, when the project ends in October 2018.

Sharma noted that CIMMYT’s presence in Afghanistan, which includes support for breeding research and training for local scientists, dates back several decades and that the latest achievements with ARIA and other partners and ACIAR support include:

Among other participants, Mahboobullah Nang, Director of Seed Certification, and Akbar Waziri, Director of the Cereal Department, both from MAIL, offered the Ministry’s support for the continuation of CIMMYT’s longstanding efforts in Afghanistan, particularly in breeding and varietal testing and promotion.

Representing ACIAR, Syed Mousawi commended capacity development activities organized by CIMMYT since the 1970s, which have raised the quality of crop research in Afghanistan and provided a vital link to the global science community over the years.