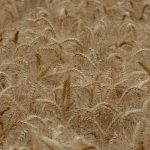 CIMMYT and Pakistan: 60 years of collaboration

A new fact sheet captures the impact of CIMMYT after six decades of maize and wheat research in Pakistan.

Dating back to the 1960s, the research partnership between Pakistan and CIMMYT has played a vital role in improving food security for Pakistanis and for the global spread of improved crop varieties and farming practices.

In 2019 Pakistan harvested 26 million tons of wheat, which roughly matches its annual consumption of the crop.

With funding from USAID, since 2013 CIMMYT has coordinated the work of a broad network of partners, both public and private, to boost the productivity and climate resilience of agri-food systems for wheat, maize, and rice, as well as livestock, vegetable, and fruit production.

Download the fact sheet:
CIMMYT and Pakistan: 60 years of collaboration