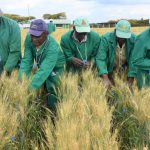 Stem rust, which occurs mainly in warm and humid conditions, is a serious biotic threat to wheat that can destroy healthy plants just a few weeks before harvest, resulting in huge yield losses to farmers. Along with leaf rust and stripe rust, it is the among the world’s most threatening wheat fungal diseases, dreaded by farmers for centuries.

Two decades ago, a virulent race of stem rust — identified as Ug99 — was identified in Uganda. The race went on to cause major epidemics in Kenya in 2002 and 2004. It continues to evolve and emerge into new races. Ug99 and its variants have since spread across East African highlands to South Africa, and to Yemen and Iran, threatening regional food security.

To tackle this stem rust pathogen, the International Maize and Wheat Improvement Center (CIMMYT) and Cornell University established the International Stem Rust Phenotyping Platform in Njoro, Nakuru County, Kenya, in collaboration with the Kenya Agricultural and Livestock Research Organization (KALRO) through the Durable Rust Resistance in Wheat (DRRW) project in 2008.

Over the past decade, wheat breeders and pathologists have worked collaboratively at the facility to stay ahead of this fast-evolving wheat stem rust fungus. This partnership has resulted in the release of over 150 wheat lines around the world, with resistance to Ug99 and its variants. The development of these high-yielding varieties suitable to various agro-ecologies has been possible with support from the Bill & Melinda Gates Foundation and the UK Department for International Development (DFID) initially through the DRRW project, and presently as part of the Delivering Genetic Gain in Wheat (DGGW) project, managed by Cornell University.

Phenotyping – the use of field-testing technology to identify desired plant traits – is a core component in the facility. The facility uses the CIMMYT Mexico-Kenya shuttle breeding system to quickly evaluate and select wheat lines for stem rust resistance. It also evaluates wheat germplasm from different countries, and “mapping populations” — crosses of diverse parents — to identify and characterize new sources of rust resistance.

The CIMMYT Mexico-Kenya shuttle breeding system allows breeders to plant at two locations to rapidly advance new plant generations and expose the wheat to different stresses (abiotic and biotic). Testing in Obregon yields wheat lines adaptable to different agro-ecological zones, and with resistance to local races of leaf rust and stem rust pathogen, while additional testing in Kenya enhances stem rust resistance to Ug99 and its variants. This enables the Njoro facility to screen and select about 1,500-2,000 segregating wheat populations over the course of two seasons.

“Through the CIMMYT Mexico-Kenya shuttle breeding, continuous testing of wheat germplasm, speed breeding and use of modern marker technologies for genomic selection, we innovate continuously to develop improved wheat lines with a package of desired traits in a much shorter period of time,” explained Mandeep Randhawa, CIMMYT wheat breeder and wheat rust pathologist.

The Njoro screening facility has a capacity of testing 50,000 wheat lines in a year. As many as 20 countries send their germplasm to the facility for stem rust evaluation. About 600,000 wheat lines have been evaluated at Njoro over the last 10 years.

The critical challenge for breeders is to combine all desirable traits into single lines in a shorter period: say five, instead of 10 years. Such elaborate breeding efforts require sustained support and international cooperation to develop high-yielding stress resilient lines suited to various agro-ecologies.

Training and capacity building for researchers and national programs

The Njoro facility plays a major capacity-building role for partner scientists, and MSc and PhD students. CIMMYT trains and equips early career scientists to better prepare them to deal with possible new epidemics, with an annual training targeting 20-25 early-career scientists from across the world. Last year’s training took place on October 1-9, 2018, as part of the Bill & Melinda Gates Foundation- and DFID-funded DGGW project (under the “talent pipeline” objective) managed through Cornell University.

In the last decade, CIMMYT has trained over 200 scientists from national research programs.

“In addition to imparting knowledge on new techniques in wheat breeding and genetics,” said Mandeep, “we normally use such opportunities to train the scientists on evaluating germplasm for stem rust resistance and standardizing stem rust note taking.”

“With such a partnership, it is easier and more cost-effective to train our local wheat researchers as opposed to sending them to all the way to Mexico. We have had a good number of young scientists trained at this facility as a result of this valuable partnership with CIMMYT,” said Ruth Wanyera, principal research scientist at KALRO.

Strengthening national programs better prepares them to put improved lines to appropriate use in the field – a core mandate of CIMMYT accomplished through the Njoro facility.