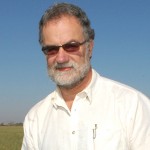 Braun has served as the Director of CIMMYT’s Global Wheat Program since 2006, Braun has an M.S. from the University of Stuttgart-Hohenheim and a Ph.D. from the University of Hohenheim. His achievements include contributing to the development and release of 44 winter wheat varieties grown on nearly 1.5 million hectares in Central and West Asia, and he is the main author or co-author on more than 120 scientific articles, including 36 in refereed journals. In 2003 he received the Chinese Friendship Award for his contributions to wheat improvement in Gansu Province.

Wheat blast, a fast-acting and devastating fungal disease, has been…

Scientists in a global collaboration have sequenced and described a…