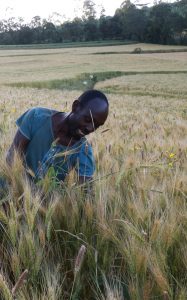 In response to Ethiopia’s worst drought in 50 years and the country’s critical shortage of maize and wheat seed for sowing in 2016, Ethiopian organizations, seed producers, and the International Maize and Wheat Improvement Center (CIMMYT) partnered to deliver over 3,400 tons of high quality seed to farmers, which was sown on more than 100,300 hectares.

Funded by the U.S. Agency for International Development (USAID) and Office of Foreign Disaster Assistance (OFDA) of the U.S. Ethiopia mission, seed relief complemented international and national food aid, helping farm families to quickly grow crops after several seasons of erratic or failed rains in Ethiopia and the catastrophic 2015-16 El Niño droughts. At that time, more than 10 million people struggled to find food, as eastern Ethiopia faced crop losses from 50 to 90 percent of expected yields.

“We went three years without rain,” says farmer Usman Kadir, whose 1.5-hectare homestead in Wanjo Bebele village, Halaba Special Woreda, supports a household of 11 persons. “We were able to eat thanks to emergency food programs.” In 2017, Kadir used emergency maize seed to sow half a hectare and harvested 3 tons, getting his farm back on its feet. “If more new improved varieties come, we want to work with you and expand our farming operation.”

Agriculture provides 42 percent of Ethiopia’s GDP, 77 percent of employment, and 84 percent of exports. Subsistence, smallholder farmers predominate, making their living from less than two hectares of land. Wheat and maize are the most important crops for food security; they are also at the center of Ethiopia’s increasingly vibrant agricultural output markets and have been the focus in recent years of public investment to raise national production.

To address this, experts identified maize and wheat varieties suitable for drought-affected areas and highly resistant to prevalent crop diseases. Of the maize varieties, some 10 percent were quality protein maize, which carries enhanced levels of key amino acids for protein synthesis in humans.

Click here to read a full report on the emergency seed relief initiative.