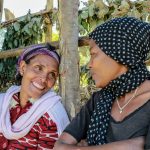 High-yielding, disease-resistant wheat varieties used by Ethiopian wheat farmers between 2015 and 2018 gave them at least 20% more grain than conventional varieties, profits of nearly $1,000 per hectare when they grew and sold seed, and generally improved food security in participating rural households.

These are the result of a project to rapidly multiply and disperse high-quality seed of new improved varieties, and the work of leading Ethiopian and international research organizations. The outcomes of this project have benefitted nearly 1.6 million people, according to a comprehensive new publication.

“Grown chiefly by smallholders in Ethiopia, wheat supports the livelihoods of 5 million farmers and their families, both as a household food crop and a source of income,” said Bekele Abeyo, wheat scientist of the International Maize and Wheat Improvement Center (CIMMYT), leader of the project, and chief author of the new report. “Improving wheat productivity and production can generate significant income for farmers, as well as helping to reduce poverty and improve the country’s food and nutrition security.”

Wheat production in Ethiopia is continually threatened by virulent and rapidly evolving fungal pathogens that cause “wheat rusts,” age-old and devastating diseases of the crop. Periodic, unpredictable outbreaks of stem and stripe rust have overcome the resistance of popular wheat varieties in recent years, rendering the varieties obsolete and in urgent need of replacement, according to Abeyo.

“The eastern African highlands are a hot spot for rusts’ spread and evolution,” Abeyo explained. “A country-wide stripe rust epidemic in 2010 completely ruined some susceptible wheat crops in Oromia and Amhara regions, leaving small-scale, resource-poor farmers without food or income.”

The Wheat Seed Scaling project identified and developed new rust-resistant wheat varieties, championed the speedy multiplication of their seed, and used field demonstrations and strategic marketing to reach thousands of farmers in 54 districts of Ethiopia’s major wheat growing regions, according to Abeyo. The United States Agency for International Development (USAID) funded the project and the Ethiopian Institute of Agricultural Research (EIAR) was a key partner.

A critical innovation has been to link farmer seed producers directly to state and federal researchers who supply the parental seed — known as “early-generation seed”— according to Ayele Badebo, a CIMMYT wheat pathologist and co-author of the new publication. “The project has also involved laboratories that monitor seed production and that test harvested seed, certifying it for marketing,” Badebo said, citing those accomplishments as lasting legacies of the project.

Abeyo said the project built on prior USAID-funded efforts, as well as the Durable Rust Resistance in Wheat (DRRW) and Delivering Genetic Gain in Wheat (DGGW) initiatives, led by Cornell University and supported by the Bill & Melinda Gates Foundation and the UK Department for International Development (DFID).

Protecting crops of wheat, a vital food in eastern Africa, requires the collaboration of farmers, governments and researchers, according to Mandefro Nigussie, Director General of EIAR.

“More than 131,000 rural households directly benefited from this work,” he said. “The project points up the need to identify new resistance genes, develop wheat varieties with durable, polygenic resistance, promote farmers’ use of a genetically diverse mix of varieties, and link farmers to better and profitable markets.”