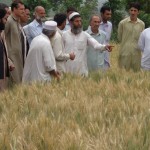 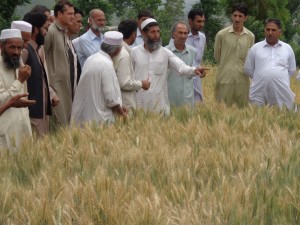 “Targeting smallholders, vulnerable people, and women-headed households has been seen as a good strategy to ensure food security and improve livelihoods,” said Joshi. “We’re moving forward on our vision to integrate the best wheat varieties with appropriate agronomic practices.”

Initiatives are now focusing on building capacity in various public and private sector partners for sustainable impact. Encouraged by the results, the National Rural Support Program (NRSP), a not-for-profit development organization established in 1991 that fosters a countrywide network of more than 200,000 grassroots organizations across 56 districts, has committed to make the activities described part of their regular program. Recently, the NRSP Board of Directors also approved setting up a subsidiary seed company to commercialize best wheat and other crop seed varieties through their networks. Joshi said that nearly 2,000 tons of seed, including basic seed of new wheat varieties, will be produced in the far-flung areas of Pakistan, and new partnerships have been developed for Balochistan and Gilgit-Baltistan, where agriculture research and extension needs extra support, to fast-track the spread of best practices from this work.

The activities and outputs are part of the Agricultural Innovation Project (AIP) for Pakistan, led by CIMMYT and funded by the U.S. Agency for International Development (USAID).