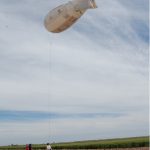 “Agriculture’s critical challenges of providing food security and better nutrition in the face of climate change can only be met through global communities that share knowledge and outputs; looking inward will not lead to results,” said Ulrich Schurr, director of the Institute of Bio- and Geosciences of the Forschungszentrum Jülich research center, speaking at the 4th International Plant Phenotyping Symposium

One such community is the International Plant Phenotyping Network(IPPN), chaired by Schurr and co-host of the symposium in December, with the Mexico-based International Maize and Wheat Improvement Center, known by its Spanish acronym, CIMMYT.

“Phenotyping” is the application of new technology — including satellite images, airborne cameras, and multi-spectral sensors mounted on robotic carts — to the age-old art of measuring the traits and performance of breeding 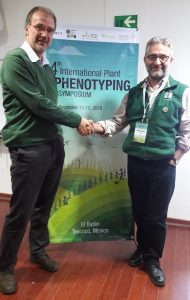 lines of maize, wheat and other crops, Schurr said.

“Farmers domesticated major food crops over millennia by selecting and using seed of individual plants that possessed desirable traits, like larger and better quality grain,” he explained. “Science has helped modern crop breeders to ‘fast forward’ the process, but breeders still spend endless hours in the field visually inspecting experimental plants. Phenotyping technologies can expand their powers of observation and the number of lines they process each year.”

Adapting scanning devices and protocols pioneered for human medicine or engineering, phenotyping was initially confined to labs and other controlled settings, according to Schurr.

“The push for the field started about five years ago, with the availability of new high-throughput, non-invasive devices and the demand for field data to elucidate the genetics of complex traits like yield or drought and heat tolerance,” he added.

Less than 10 years ago, Schurr could count on the fingers of one hand the number of institutions working on phenotyping. “Now, IPPN has 25 formal members and works globally with 50 institutions and initiatives.”

Many ways to see plants and how they grow

In controlled environments such as labs and greenhouses, researchers use automated systems and environmental simulation to select sources of valuable traits and to gain insight on underlying plant physiology that is typically masked by the variation found in fields, according to Schurr.

“Several specialists in our symposium described automated lab setups to view and analyze roots and greenhouse systems to assess crop shoot geometry, biomass accumulation and photosynthesis,” he explained. “These are then linked to crop simulation models and DNA markers for genes of important traits.”

Schurr said that support for breeding and precision agriculture includes the use of cameras or other sensors that take readings from above plant stands and crop rows in the field.

“These may take the form of handheld devices or be mounted on autonomous, robotic carts,” he said, adding that the plants can be observed using normal light and infrared or other types of radiation reflected from the plant and soil.

“The sensors can also be mounted on flying devices including drones, blimps, helicopters or airplanes. This allows rapid coverage of a larger area and many more plants than are possible through visual observation alone by breeders walking through a field.”

In the near future, mini-satellites equipped with high-resolution visible light sensors to capture and share aerial images of breeding plots will be deployed to gather data in the field, according to symposium participants.

As is typical with new technologies and approaches to research, phenotyping for crop breeding and research holds great promise but must overcome several challenges, including converting images to numeric information, managing massive and diverse data, interfacing effectively with genomic analysis and bringing skeptical breeders on board. 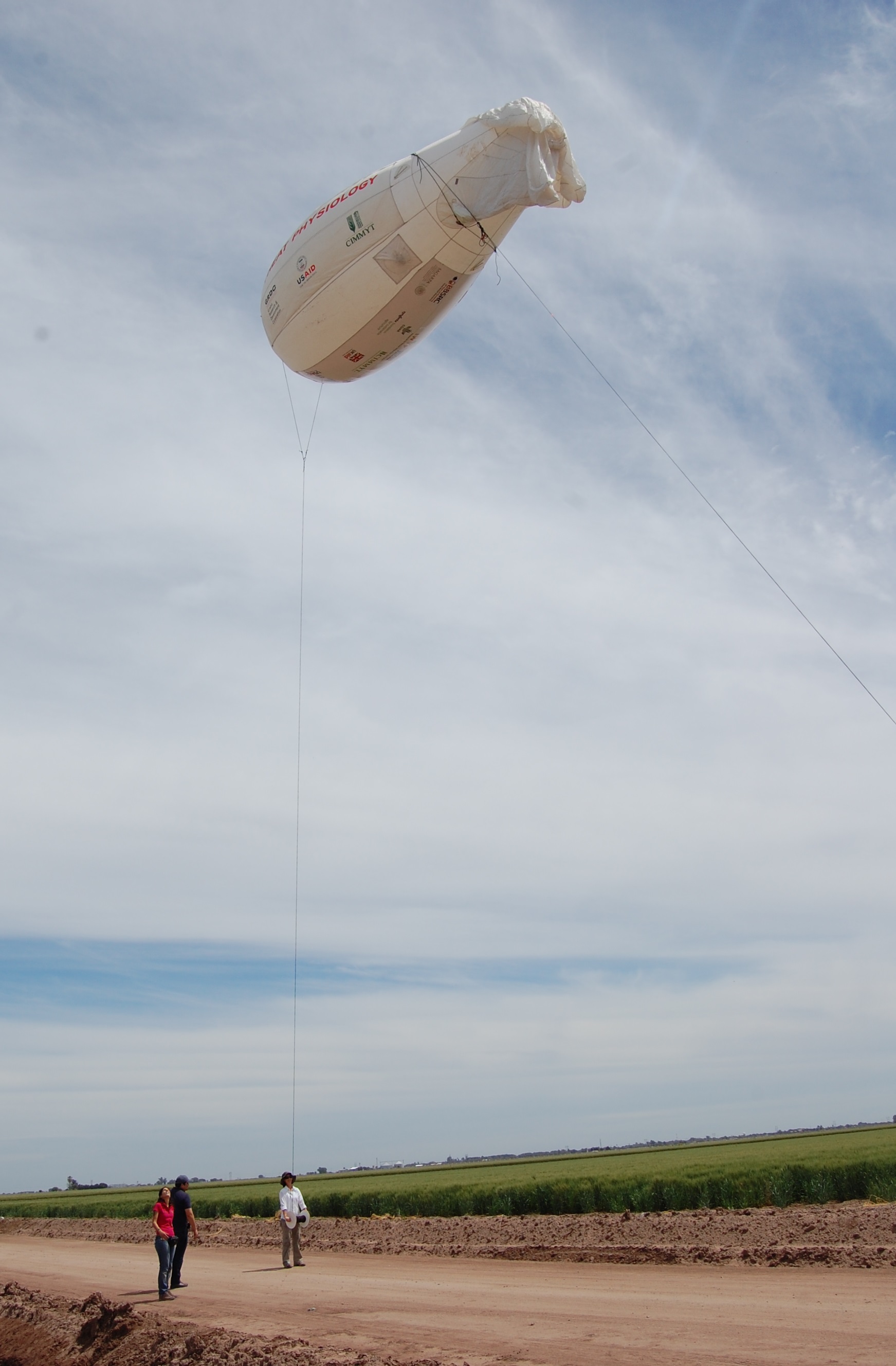 Cameras and other sensors mounted on flying devices like this blimp provide crop researchers with important visual and numerical information about crop growth, plant architecture and photosynthetic traits, among other characteristics. Photo: Emma Quilligan/CIMMYT

“The demands of crop breeding are diverse — identifying novel traits, studies of genetic resources and getting useful diversity into usable lines, choosing the best parents for crosses and selecting outstanding varieties in the field, to name a few,” Schurr explained. “From the breeders’ side, there’s an opportunity to help develop novel methods and statistics needed to harness the potential of phenotyping technology.”

A crucial linkage being pursued is that with genomic analyses. “Studies often identify genome regions tied to important traits like photosynthesis as ‘absolute,’ without taking into account that different genes might come into play depending on, say, the time of day of measurement,” Schurr said. “Phenotyping can shed light on such genetic phenomena, describing the same thing from varied angles.”

Speaking at the symposium, Greg Rebetzke, a research geneticist since 1995 at Australia’s Commonwealth Scientific and Industrial Research Organisation (CSIRO), said that the effective delivery in commercial breeding of “phenomics” — a term used by some to describe the high-throughput application of phenotyping in the field — is more a question of what and when, not how.

“It’s of particular interest in breeding for genetically complex traits like drought tolerance,” Rebetzke said. “Phenomics can allow breeders to screen many more plants in early generations of selection, helping to bring in more potentially useful genetic diversity. This genetic enrichment with key alleles early on can significantly increase the likelihood of identifying superior lines in the later, more expensive stages of selecting, which is typically done across many different environments.”

Moreover, where conventional breeding generally uses “snaphot” observations of plants at different growth stages, phenotyping technology can provide detailed time-series data for selected physiological traits and how they are responding to their surroundings — say, well-watered versus dry conditions — and for a much greater diversity and area of plots and fields.

Phenotyping is already being translated from academic research to commercial sector development and use, according to Christoph Bauer, leader of phenotyping technologies at KWS, a German company that breeds for and markets seed of assorted food crops.

“It takes six-to-eight years of pre-breeding and breeding to get our products to market,” Bauer said in his symposium presentation. “In that process, phenotyping can be critical to sort the ‘stars’ from the ‘superstars’.”

Commercial technology providers for phenotyping are also emerging, according to Schurr, helping to ensure robustness, the use of best practices and alignment with the needs of academic and agricultural industry customers.

“The partnership triad of academia, commercial providers and private seed companies offers a powerful avenue for things like joint analysis of genotypic variation in the pre-competitive domain or testing of cutting-edge technology,” he added.

On the final morning of the symposium, participants broke off into groups to discuss special topics, including the cost effectiveness of high-throughput phenotyping and its use to analyze crop genetic resources, measuring roots, diagnostics of reproductive growth, sensor technology needs, integrating phenotypic data into crop models, and public-private collaboration.

“CIMMYT does relevant breeding for millions of maize and wheat farmers — many of them smallholders — who live in areas often of little interest for large-scale companies, providing support to the national research programs and local or regional seed producers that serve such farmers,” Schurr said. “The center also operates phenotyping platforms worldwide for traits like heat tolerance and disease resistance and freely spreads knowledge and technology.”