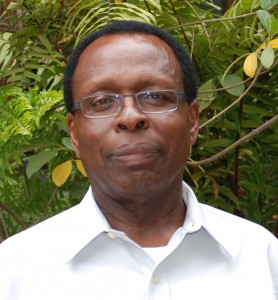 mmunity celebrates the illustrious life and mourns the passing on 11 December of Wilfred M. Mwangi, distinguished Kenyan scholar, statesman and researcher who dedicated his career to improving the food security and livelihoods of farmers in sub-Saharan Africa. In 27 years at CIMMYT, Mwangi made significant contributions both as a principal scientist and distinguished economist with authorship on nearly 200 publications, as well as country and regional liaison officer, associate director of the global maize program, leader of the Drought Tolerant Maize for Africa (DTMA) project and CIMMYT regional representative for Africa.

In the latter capacity and with the support and coordination of WHEAT, Mwangi’s effective work in policy circles was critical to achieving the 2013 endorsement by African Union (AU) agriculture ministers of wheat as a strategic crop for Africa.

“He served CIMMYT with distinction for decades and was enormously important in promoting smallholder maize research in Africa,” said Derek Byerlee, retired World Bank policy researcher who led CIMMYT’s socioeconomics team in the late 1980s-early 90s and recruited Mwangi. “Even more, he was a great human being who was highly-respected throughout the region. Africa and the world are poorer for his loss.”

New testing and learning platform aims to build the knowledge base …

Wheat blast, a fast-acting and devastating fungal disease, has been…

Partners in the International Wheat Yield Partnership are finding e…