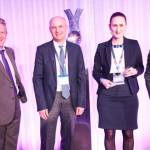 The research team behind the MARPLE (Mobile And Real-time PLant disEase) diagnostic kit won the international impact category of the annual Innovator of the Year Awards sponsored by the UK Biotechnology and Biological Sciences Research Council (BBSRC).

The team — Diane Saunders of the John Innes Centre (JIC), Dave Hodson of the International Maize and Wheat Improvement Center (CIMMYT) and Tadessa Daba of the Ethiopian Institute of Agricultural Research (EIAR) — was presented with the award at a high-profile event at the London Science Museum on 15 May 2019 before an audience of leading figures from the worlds of investment, industry, government, charity and academia, including Chris Skidmore MP, Minister of State for Universities, Science, Research and Innovation.

The BBSRC Innovator of the Year awards, now in their 11th year, recognize and support individuals or teams who have taken discoveries in bioscience and translated them to deliver impact. Reflecting the breadth of research that BBSRC supports, they are awarded in four categories of impact: commercial, societal, international and early career.

As finalists in the international impact category, Saunders, Hodson and Daba were among a select group of 12 finalists competing for the prestigious Innovator of the Year 2019 award. In addition to international recognition, they received a £10,000 award.

“I am delighted that this work has been recognized,” said Hodson. “Wheat rusts are a global threat to agriculture, and to the livelihoods of farmers in developing countries such as Ethiopia. MARPLE diagnostics puts state of the art, rapid diagnostic results in the hands of those best placed to respond: researchers on the ground, local government and farmers.”

MARPLE diagnostics is the first operational system in the world using nanopore sequence technology for rapid diagnostics and surveillance of complex fungal pathogens in the field.

In its initial work in Ethiopia, the suitcase-sized field test kit has positioned the country, among the region’s top wheat producers, as a world leader in pathogen diagnostics and forecasting. Generating results within 48 hours of field sampling, the kit represents a revolution in plant disease diagnostics with far-reaching implications for how plant health threats are identified and tracked into the future.

MARPLE is designed to run at a field site without constant electricity and with the varying temperatures of the field.

“This means we can truly take the lab to the field,” explained Saunders. “Perhaps more importantly though, it means that smaller, less resourced labs can drive their own research without having to rely on a handful of large, well-resourced labs and sophisticated expertise in different countries.”

In a recent interview with JIC, EIAR Director Tadessa Daba said, “We want to see this project being used on the ground, to show farmers and the nation this technology works.”

Development of the MARPLE diagnostic kit was funded by the Biotechnology and Biological Sciences Research Council (BBSRC) and the CGIAR Platform for Big Data in Agriculture Inspire Challenge. Continued support is also provided by the BBSRC Excellence with Impact Award to the John Innes Centre and the Delivering Genetic Gain in Wheat project led by Cornell University International Programs that is funded by the UK Department for International Development (DFID) and the Bill & Melinda Gates Foundation.

More information on the JIC-CIMMYT-EIAR team’s BBSRC recognition can be found on the JIC website, the BBSRC website and the website of the CGIAR Research Program on Wheat.