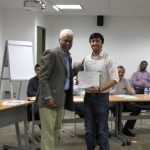 Written by Ricardo Lopez on September 10, 2015. Posted in Articles, News 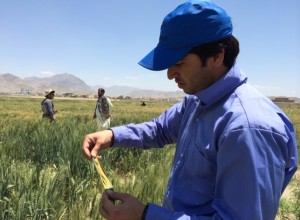 CIUDAD OBREGON, Mexico (September 10, 2015)- Zaki Afshar grew up in the small city of Puli Khumri in Northern Afghanistan, visiting his father’s seven-hectare (ha) farm every weekend. Growing up in a farming community where the staple crops are wheat and rice, Afshar saw the impact agriculture could have on a community.

“A big part of why I chose agriculture was because I saw how hard the farmers worked and still suffered,” said Afshar. “I wanted to know how I could help them. Why were they not using the advanced technologies I saw available in other parts of the world?”

According to The United States Agency for International Development (USAID), 60 percent of Afghan citizens rely on agriculture to sustain their livelihoods and families. Wheat is the chief crop in Afghanistan, covering 2.5 million ha and providing about 60 percent of daily calorie intake for an average Afghan.

“We have a very basic agriculture system,” explained Afshar. “You will only see machinery used for plowing and trashing, not for sowing or even harvesting.”

Afshar attended Balkh University in Mazari Sharif, receiving a degree in Agricultural Plant Science. He currently works at the CIMMYT Afghanistan office as a project associate as in the Wheat Improvement Program.

The CIMMYT- Agricultural Research Institute of Afghanistan (ARIA) joint wheat breeding program in Afghanistan is relatively small and new. Afshar’s dream upon starting at CIMMYT was eventually to join the wheat breeding team. Last March, Afshar was able to make this dream a reality, by participating in the CIMMYT 2015 Basic Wheat Improvement Course.

The course is comprised of a three-month intensive program at the Campo Experimental Norman E. Borlaug (CENEB) in Ciudad Obregón, Sonora, Mexico. It targets young and mid-career scientists, focusing on applied breeding techniques in the field.

“On my first field visit after returning home, I realized how different things were in Kabul than in Obregón,” said Afshar “Because our program is very new, we have fewer breeders, and need more training. I am excited to share with them everything I learned in Mexico.”

In Obregón, Afshar was able to meet scientists from all over the world and learn about breeding methods used in various regions worldwide. For Afshar it was extremely important to come to Mexico to receive his training. At the end of the BWIC, Afshar was honored with the most improved wheat trainee award.

“Through this course I learned how to be a breeder, how different breeders work and new information in wheat breeding,” said Afshar. “The most exciting moment was when I joined my team back in Afghanistan and it was easy for me to score and differentiate between different types of rust, and when I realized that everyone in the field was paying attention to what I had to say.”