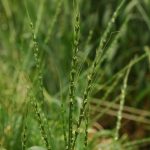 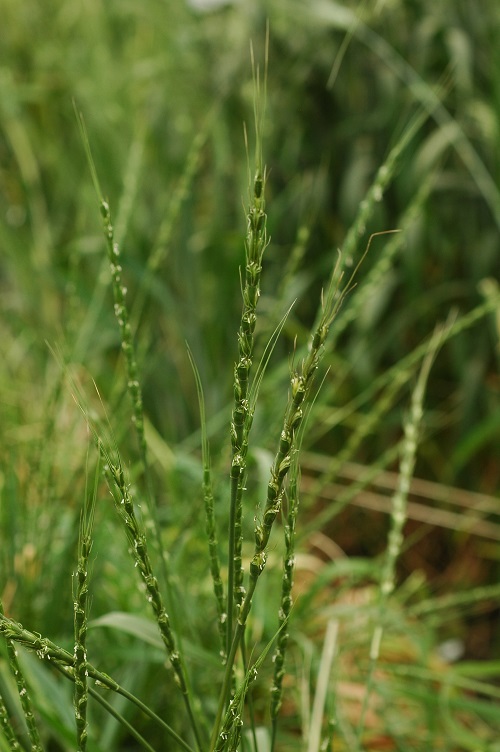 The reported work by wheat scientists paves the way for expanded use of wild grass species, such as Aegilops tauschii (also known as goat grass; pictured here) as sources of new genes for higher grain zinc in wheat. (Photo: CIMMYT)

An international team of scientists applied genome-wide association analysis for the first time to study the genetics that underlie grain zinc concentrations in wheat, according to a report published in Nature Scientific Reports on 10 September.

Analyzing zinc concentrations in the grain of 330 bread wheat lines across diverse environments in India and Mexico, the researchers uncovered 39 new molecular markers associated with the trait, as well as 2 wheat genome segments that carry important genes for zinc uptake, translocation, and storage in wheat.

The findings promise greatly to ease development of wheat varieties with enhanced levels of zinc, a critical micronutrient lacking in the diets of many poor who depend on wheat-based food, according to Velu Govindan, wheat breeder at the International Maize and Wheat Improvement Center (CIMMYT) and first author of the new report.

“A collaboration among research centers in India, Australia, the USA and Mexico, this work will expedite breeding for higher zinc through use of ‘hotspot’ genome regions and molecular markers,” said Govindan. “It also advances efforts to make selection for grain zinc a standard feature of CIMMYT wheat breeding. Because varieties derived from CIMMYT breeding are grown on nearly half the world’s wheat lands, ‘mainstreaming’ high zinc in breeding programs could improve the micronutrient nutrition of millions.”

More than 17 percent of humans, largely across Asia and Africa, lack zinc in their diets, a factor responsible for the deaths of more than 400,000 young children each year.

Often used in human disease research, the genome-wide association approach was applied in this study to zero in on genome segments — known as quantitative trait loci (QTLs) — that carry genes of interest for wheat grain zinc content, according to Govindan.

“The advantages of the genome-wide association method over traditional QTL mapping include better coverage of alleles and the ability to include landraces, elite cultivars, and advanced breeding lines in the analysis,” he explained. “Our study fully opens the door for the expanded use of wheat progenitor species as sources of alleles for high grain zinc, and the outcomes helped us to identify other candidate genes from wheat, barley, Brachypodium grasses, and rice.”
Farmers in South Asia are growing six zinc-enhanced wheat varieties developed using CIMMYT breeding lines and released in recent years according to Ravi Singh, head of the CIMMYT Bread Wheat Improvement Program.

Financial support for this study was provided by HarvestPlus (www.HarvestPlus.org), a global alliance of agriculture and nutrition research institutions working to increase the micronutrient density of staple food crops through biofortification. The views expressed do not necessarily reflect those of HarvestPlus. It was also supported by CGIAR Funders, through the Research Program on Wheat and the Research Program on Agriculture for Nutrition and Health. Research partners in India and Pakistan greatly contributed to this study by conducting high-quality field trials.