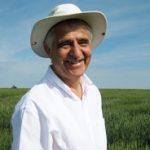 Ron DePauw is an internationally recognized scientist, who was born in rural Saskatchewan and raised on a farm near Treherne, Manitoba. Ron has devoted his life to reduce business risk for producers, to meet consumers’ requests for safe and nutritious food, to improve end-use suitability factors, and to contribute to an overall betterment of society and farm economy.

Wheat is the most widely grown crop in Canada, and generates $4 to $5 billion of direct farm receipts and additional $7 to $8 billion in value added processing. Ron actively participated in the registration of 65 wheat and six triticale cultivars. For the past 14 years, 40% to 55% of all of the wheat grown in Canada derived from cultivars that he and the team he led developed. Cultivars developed by Ron and his team exemplify the use of environmentally friendly and low input-cost genetic resistance to control a multitude of diseases and insects.

Ron has published 228 peer reviewed manuscripts, 10 book chapters with another “in press”, and close to 1000 miscellaneous publications including conference abstracts. He has received numerous awards including the Order of Canada, Saskatchewan Order of Merit, Gold Medal from Professional Institute of Canada which has only been awarded 40 times to someone in the field of science, and an Honorary Doctor of Science from the University of Saskatchewan.