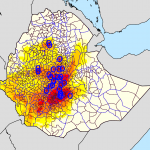 Using field and mobile phone surveillance data together with forecasts for spore dispersal and environmental suitability for disease, an international team of scientists has developed an early warning system which can predict wheat rust diseases in Ethiopia. The cross-disciplinary project draws on expertise from biology, meteorology, agronomy, computer science and telecommunications.

Reported last week in Environmental Research Letters, the new early warning system, which is the first of its kind to be implemented in a developing country, will allow policy makers and farmers all over Ethiopia to gauge the current rust situation and forecast wheat rust up to a week later.

The system was developed by the University of Cambridge, the UK Met Office, the Ethiopian Institute of Agricultural Research (EIAR), the Ethiopian Agricultural Transformation Agency (ATA) and the International Maize and Wheat Improvement Center (CIMMYT).

Ethiopia is the largest wheat producer in sub-Saharan Africa but the country still spends in excess of $600 million annually on wheat imports. More can clearly be grown at home and the Ethiopian government has targeted to achieve wheat self-sufficiency by 2023. However increasing yields has its challenges.

One major challenge to wheat production are wheat rusts. The fungal diseases can be dispersed by wind over long distances, quickly causing devastating epidemics which can dramatically reduce wheat yields. Just one outbreak in 2010 affected 30% of Ethiopia’s wheat growing area and reduced production by 15-20%.

The pathogens that cause rust diseases are continually evolving and changing over time, making them difficult to control. “New strains of wheat rust are appearing all the time – a bit like the flu virus,” explained Dave Hodson, principal scientist CIMMYT and co-author of the research study.

In the absence of resistant varieties, one solution to wheat rust is to apply fungicide, however the Ethiopian government has limited supplies. The early warning system will help to prioritize areas at highest risk of the disease, so that the allocation of fungicides can be optimized.

The University of Cambridge and the UK Met office then provide automated 7 day advanced forecast models for wheat rust spore dispersal and environmental suitability based on disease presence.

All of this information is fed into an early warning unit that receives updates automatically on a daily basis. An advisory report is sent out every week to development agents and the national authorities and the information also gets passed on to researchers and farmers.

“If there’s a high risk of wheat rust developing, farmers will get a targeted alert by SMS sent by ATA. This gives the farmer about three weeks to take action,” explained Hodson. The ATA Farmers’ Hotline now has over four million farmers and extension agents registered, enabling rapid information dissemination throughout Ethiopia.

“Rust diseases are a grave threat to wheat production in Ethiopia. The timely information from this new system will help us protect farmers’ yields, and reach our goal of wheat self-sufficiency,” said EIAR Director Mandefro Nigussie.

The system puts Ethiopia at the forefront of early warning systems for wheat rust.

“Nowhere else in the world really has this type of system. It’s fantastic that Ethiopia is leading the way on this,” said Hodson.

The near real-time diagnostics tool MARPLE (Mobile And Real-time PLant disEase diagnostics) is also making huge leaps in wheat rust detection. Strains of yellow rust can be identified in just 48 hours using this suitcase sized kit – a process that normally takes months. The researchers recommended that this new technology be used in conjunction with the Early Warning System, to allow more accurate assessments and predictions of disease spread in Ethiopia.

Read the press release on CIMMYT.org.

This study was made possible through the support provided by the BBSRC GCRF Foundation Awards for Global Agriculture and Food Systems Research, which brings top class UK science to developing countries, the Delivering Genetic Gains in Wheat (DGGW) Project managed by Cornell University and funded by the Bill & Melinda Gates Foundation and the UK Department for International Development (DFID). The Government of Ethiopia also provided direct support into the early warning system.