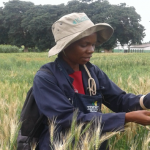 Wheat blast, a fast-acting and devastating fungal disease, has been reported for the first time on the African continent, according to a new article published by scientists from the Zambian Agricultural Research Institute (ZARI), the International Maize and Wheat Improvement Center (CIMMYT) and the US Department of Agriculture – Foreign Disease Weed Science Research Unit (USDA-ARS) in the scientific journal PLoS One.

Symptoms of wheat blast first appeared in Zambia during the 2018 rainy season in experimental plots and small-scale farms in the Mpika district, Muchinga province.

Wheat blast poses a serious threat to rain-fed wheat production in Zambia and raises the alarm for surrounding regions and countries on the African continent with similar environmental conditions. Worldwide, 2.5 billion consumers depend on wheat as a staple food, and in recent years, several African countries have been actively working towards reducing dependence on wheat imports.

“This presents yet another challenging biotic constraint to rain-fed wheat production in Zambia,” said Batiseba Tembo, wheat breeder at ZARI and lead scientist on the study.

“The first occurrence of the disease was very distressing. This happened at the spike stage, and caused significant losses,” said Tembo. “Nothing of this nature has happened before in Zambia.”

Researchers were initially confused when symptoms of the disease in the Mpika fields were first reported. Zambia has unique agro-climatic conditions, particularly in the rainfed wheat production system, and diseases such as spot blotch and Fusarium head blight are common.

“The crop had silvery white spikes and a green canopy, resulting in shriveled grains or no grains at all…Within the span of 7 days, a whole field can be attacked,” said Tembo. Samples were collected and analyzed in the ZARI laboratory, and suspicions grew among researchers that this may be a new disease entirely.

A history of devastation

Wheat blast, caused by Magnaporthe oryzae pathotype Triticum (MoT), was initially discovered in Brazil in 1985, and within decades had affected around 3 million hectares of wheat in South America alone. The disease made its first intercontinental jump to Asia in 2016, causing a severe outbreak in Bangladesh, reducing yield on average by as much as 51% in the affected fields.

The disease has now become endemic to Bangladesh, and has potential to expand to similar warm, humid and wet environments in nearby India and Pakistan, as well as other regions of favorable disease conditions.

Wheat blast spreads through infected seeds and crop residues as well as by spores that can travel long distances in the air. The spread of blast within Zambia is indicated by both mechanisms of expansion.

Tembo participated in the Basic Wheat Improvement Course at CIMMYT in Mexico, where she discussed the new disease with Pawan Singh, head of Wheat Pathology at CIMMYT.  Singh worked with Tembo to provide guidance and the molecular markers needed for the sample analysis in Zambia, and coordinated the analysis of the wheat disease samples at the USDA-ARS facility in Fort Detrick, Maryland.

A cause for innovation and collaboration

CIMMYT and the CGIAR Research Program on Wheat (WHEAT) are taking action on several fronts to combat wheat blast. Trainings, such as an international course led by the Bangladesh Wheat and Maize Research Institute (BWMRI) in collaboration with CIMMYT, WHEAT and others, invite international participants to gain new technical skills in blast diagnostics and treatment and understand different strategies being developed to mitigate the wheat blast threat. WHEAT scientists and partners are also working quickly to study genetic factors that increase resistance to the disease and develop early warning systems, among other research interventions.

“A set of research outcomes, including the development of resistant varieties, identification of effective fungicides, agronomic measures, and new findings in the epidemiology of disease development will be helpful in mitigating wheat blast in Zambia,” said Singh.

Tembo concluded, “It is imperative that the regional and global scientific community join hands to determine effective measures to halt further spread of this worrisome disease in Zambia and beyond.”

About Accelerating Genetic Gains in Maize and Wheat for Improved Livelihoods

Accelerating Genetic Gains in Maize and Wheat for Improved Livelihoods (AGG) is a 5-year project that brings together partners in the global science community and in national agricultural research and extension systems to accelerate the development of higher-yielding varieties of maize and wheat — two of the world’s most important staple crops.  Funded by the Bill & Melinda Gates Foundation, the UK Foreign, Commonwealth & Development Office (FCDO), the U.S. Agency for International Development (USAID) and the Foundation for Food and Agriculture Research (FFAR), AGG fuses innovative methods that improve breeding efficiency and precision to produce and deliver high-yielding varieties that are climate-resilient, pest- and disease-resistant, highly nutritious, and targeted to farmers’ specific needs.