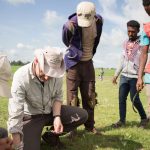 Q&A with Dave Hodson on MARPLE and Big Data

The MARPLE (Mobile And Real-time PLant disease) project – a project to test and pilot a revolutionary mobile lab in Ethiopia, led by the John Innes Centre, the International Maize and Wheat Improvement Center (CIMMYT) and the Ethiopian Institute of Agricultural Research (EIAR)—won the CGIAR Platform for Big Data in Agriculture Inspire Challenge Scale Up award in 2018.

The Inspire Challenge encourages CGIAR partners, universities and others to use big data approaches through innovative pilot projects to advance agricultural research and development. To be named a winner, projects must have real potential for developmental impact, have mobilized underused or misused data, and demonstrate meaningful partnerships with CGIAR and other sector members. Ultimately, the Inspire Challenge looks for novel approaches to inform policies and applications in agriculture and food security.

We sat down with CIMMYT Principal Scientist and rust pathologist Dave Hodson to ask him about the project and its relationship with Big Data for Agriculture.

What is the significance of Big Data to your work?
Advances in sequencing technology, and the use of innovative big data approaches on sequence data from thousands of yellow rust isolates, opened the door for Diane Saunders and colleagues at the John Innes Centre in the UK to develop revolutionary, near-real time, mobile pathogen diagnostic techniques using portable palm-sized gene sequencers. The final result being the first operational system in the world using nanopore sequence technology for rapid diagnostics and surveillance of complex fungal pathogens in situ.

How do you see the role of the CGIAR Platform for Big Data in Agriculture in your work?
Support from the CGIAR Big Data Platform was critical to establish the partnership between John Innes, the Ethiopian Institute of Agricultural Research (EIAR) and CIMMYT and enable piloting and testing of the new MARPLE diagnostic platform in Ethiopia. The choice of Ethiopia to be the first country for initial testing was based on several key factors. Firstly, a strong national partner in EIAR; secondly, the critical importance of wheat and wheat rust diseases in the country. Ethiopia is the largest wheat producer in sub-Saharan Africa, but it is also considered the gateway for new wheat rust strains entering into Africa from Asia. All these factors made Ethiopia the highest priority country to take the lead in testing this revolutionary new and rapid pathogen diagnostics platform.

How did it impact this MARPLE project?
The pilot and subsequent scale-up project from the CGIAR Big Data Platform has enabled in-country capacity to be developed, and cutting edge technology for rapid pathogen diagnostics to be deployed in the front-line in the battle against devastating wheat rust diseases. The scientific innovation in developing the MARPLE platform, coupled to the suitability of the technology for developing country partners has now attracted support and interest from other donors. Matching funds were recently obtained for the scale -up phase of MARPLE from the Delivering Genetic Gain in Wheat project (implemented by Cornell University and funded by the Bill and Melinda Gates Foundation and the UK Department for International Development). This scale-up phase of the project will see a set of distributed MARPLE hubs established and embedded within the Ethiopian wheat research system – resulting in a sentinel system for the rapid detection of new yellow rust races that is unparalleled anywhere in the world. The scientific breakthrough in developing rapid diagnostics for complex fungal pathogens using nanopore sequencing will permit the development of similar systems for other important fungal diseases in the future.

The MARPLE project was selected as a 2017 winner, with the team receiving 100,000 USD to put their ideas into practice. The team came runners up for the Scale Up award the following year, receiving an additional USD 125,000 for their outstanding ability to demonstrate the project’s proven viability and potential for impact. 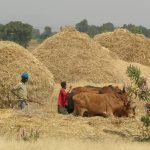 Past, present and future of crop modelling for food security

Written by mmacneil on January 21, 2019. Posted in Article

This new publication summary was originally posted on the CIMMYT blog.

“Crop modelling has the potential to significantly contribute to global food and nutrition security,” claim the authors of a recently published paper on the role of modelling in international crop research. “Millions of farmers, and the societies that depend on their production, are relying on us to step up to the plate.”

Among other uses, crop modelling allows for foresight analysis of agricultural systems under global change scenarios and the prediction of potential consequences of food system shocks. New technologies and conceptual breakthroughs have also allowed modelling to contribute to a better understanding of crop performance and yield gaps, improved predictions of pest outbreaks, more efficient irrigation systems and the optimization of planting dates.

While renewed interest in the topic has led in recent years to the development of collaborative initiatives such as the Agricultural Model Intercomparison and Improvement Project (AgMIP) and the CGIAR Platform for Big Data in Agriculture, further investment is needed in order to improve the collection of open access, easy-to-use data available for crop modelling purposes. Strong impact on a global scale will require a wide range of stakeholders – from academia to the private sector – to contribute to the development of large, multi-location datasets.

In “Role of Modelling in International Crop Research: Overview and Some Case Studies,” CGIAR researchers, including CIMMYT wheat physiologist Matthew Reynolds,  outline the history and basic principles of crop modelling, and describe major theoretical advances and their practical applications by international crop research centers. They also highlight the importance of agri-food systems, which they view as key to meeting global development challenges. “The renewed focus on the systems-level has created significant opportunities for modelers to participant in enhancing the impact of science on developments. However, a coherent approach based on principles of transparency, cooperation and innovation is essential to achieving this.”

The authors call for closer interdisciplinary collaboration to better serve the crop research and development communities through the provision of model-based recommendations which could range from government-level policy development to direct crop management support for resource-poor farmers.