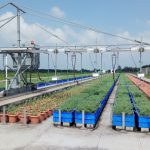 This article by Sakshi Saini was originally published on the CCAFS website.

Ever-increasing emissions of greenhouse gases (GHG) is a global concern due to the association of high atmospheric GHG concentrations with global warming and climate change. A large and growing body of evidence predicts that this would further have a multifaceted impact on the human population, especially the poor and vulnerable groups, further exacerbating their vulnerabilities.

But what about crops? Plants use carbon dioxide (CO2)—one of the most abundant GHGs, for photosynthesis. So shouldn’t an increase in atmospheric carbon dioxide aid crops to flourish? A counter-argument to this would be that at the same time there would be changes in other factors such as a change in precipitation rate, frequency and intensity of rains, among others, which might negatively impact crop production. So, how exactly would climatic variations impact the yield and productivity of crops? These are some of the questions that have been a global concern. Many studies have researched this, employing varied approaches such as systems biology, physiology and crop modelling. However, unprecedented changes in climatic conditions still pose uncertainties on the impacts on crops.

Recent research by an interdisciplinary team of scientists from the International Crops Research Institute for the Semi-Arid Tropics (ICRISAT), the CGIAR Research Program on Climate Chanage, Agriculture and Food Security (CCAFS)-Africa and CCAFS-Asia aspires to answer some of these questions. As part of this research, they have compiled recent progress made in the physiological and molecular attributes in plants, with special emphasis on legumes under elevated CO2 conditions in a climate change scenario. The study proposes a strategic research framework for crop improvement that integrates genomics, systems biology, physiology and crop modelling approaches to cope with the changing climate. Some of the prime results of the study are as follows:

A range of physiological and biochemical alterations take place in plants exposed to elevated CO2. In the case of legumes, elevated atmospheric CO2 concentrations also affect the nutritional quality and nodulation, causes changes in rhizosphere and Biological Nitrogen Fixation (BNF), among others. Studies have shown that elevated CO2 would stimulate plant growth under nitrogen-sufficient conditions, but under nitrogen-limited conditions, it may have the detrimental effect of reducing plant growth by altering its primary metabolism. The anatomical differences between C3 and C4 plants (plants with C3 and C4 photosynthetic pathways) and their different ways of sequestering carbon (removing carbon dioxide from the atmosphere), have been an area of interest for climate scientists. Elevated CO2 combined with limited nitrogen may also promote biological ageing (senescence) rates as observed in flag leaves of rice and wheat. Studies also show that a higher level of carbon dioxide increases senescence rate in legumes.

2. Impact of elevated carbon-dioxide interaction with other abiotic stresses

As mentioned earlier, CO2 is not the only factor that is impacting plant growth, it is dependent on other environmental factors such as water deficit stress and temperature, among others. Thus, these factors also need to be considered in combination with the atmospheric concentration. Studies have reported that elevated CO2 induced a decrease (of 10%) in evaporation rates in both C3 and C4 plants. This caused an increase in canopy temperature (0.7 °C) coupled with a 19% yield increase in C3 crops. There is evidence that an increase in CO2 has also phased down the effect of oxidative stress. Though, there is limited literature available about the impact of elevated carbon dioxide keeping into consideration the drought and heat responses of various crops.

3. Elevated carbon dioxide and its interaction with biotic stress-altered pathogen aggravation and virulence

The changing climate has affected pest-crop dynamics with more frequent outbreaks and changed the geographical distribution of pests, posing an economic threat to crops. Sometimes, other abiotic stresses like drought could increase fungal virulence as reported in drought-tolerant peanut and Aspergillus interaction. However, a combined interaction is not always additive as both unique and common responses have been observed. Increased CO2 causes greater photosynthate availability, but reduced foliage quality along with an increased concentration of plant defensive compounds after a pest infestation. This, in turn, affects insect feeding and increases disease incidence and predator parasitism interactions.

While elevated CO2 may cause greater photosynthate availability, the interaction of elevated CO2 with mentioned biotic and abiotic stresses calls for the development of climate change ready crop varieties. Thus, genomics assisted breeding along with other modern approaches can be very powerful tools to develop superior varieties, to de-risk the existing food system. This transformative approach towards the production of plants and crops would be instrumental in sustainably ensuring food security.

An integrated research framework for the future

The discussion and evidence presented illustrate that the effect of elevated CO2 under a changing climate scenario is multifaceted and aggravated by the overlapping interaction of stressors. The notion that CO2 has beneficial effects in terms of increased productivity is now being questioned since the photosynthetic fertilization effect is short term and often not time-tested for major crop species. The IPCC 2018 special report highlights several policy-level approaches that are aimed at limiting greenhouse gas emission. The scientific community needs to be prepared with suitable research outcomes to cope with the effects of elevated atmospheric CO2 levels. In this regard, an integrated framework combining different biological disciplines has been proposed by the team (Fig. 1).

While significant advances have been made in crop genomics, systems biology and genomics-assisted breeding, the success of trait dissection and trait deployment is very much dependent on the quality and precision of phenotyping. Recent advances in plant phenotyping using high throughput phenotyping tools have revolutionized the uptake of phenotype and allelic information in a more precise and robust way and complemented high throughput genomic resources

In the opinion of the authors of the publication, an integrated research framework that includes genomics/ systems biology and phenomics together with crop modelling would result in faster data-driven advances for understanding the optimal GxExM (genotype x environment x management) scenarios for current and projected climates. Interdisciplinary approaches as has been done through the Climate-Smart Village approach, are key to graduating from a descriptive level to an improved quantitative and process-level understanding of sustainable crop productivity.