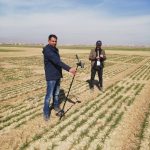 Visiting scientist and wheat physiology breeder Ajit Nehe recently completed a one and half year tenure at the International Maize and Wheat Improvement Center (CIMMYT).

A native of India, Nehe joined CIMMYT as a visiting scientist in wheat physiology under the International Winter Wheat Improvement Program (IWWIP) based in Ankara, Turkey in August 2018. Under the supervision of IWWIP Head Alex Morgunov, Nehe, who has a PhD in wheat physiology, has been working on understanding drought tolerance in winter wheat and developing climate resilient varieties.

Taking the academic path was not an easy one for Nehe, who faced his own personal challenges.

“Having dyslexia — not being able to read and write properly — and not knowing that I was dyslexic until I started my PhD in the UK, my life was never easy. But having the dyslexic advantage of logical and scientific thinking I always found the way during my difficult academic and professional life,” said Nehe.

He hopes that his story will encourage other budding researchers who might face similar challenges. “I would like to inspire the young researchers who want to develop their careers despite their difficulties.”

At CIMMYT, Nehe has been working on experiments to study nitrogen use efficiency and grain quality in spring wheat at three research institutes in Turkey:  Adana, Adapazari, and Izmir. After a successful first year, Nehe’s colleagues will repeat the experiments next year, with his input, with a view to publishing their results in a high impact research paper.

He has also contributed to the development of a root phenotyping platform using shovelomic techniques – which involves excavating roots by shovel, washing the roots, taking images of the root system and using image analysis software to get data on root traits.

Most recently, he trained researchers on the use of RBG cameras and software for image analysis, drone image segmentation, and data extraction and analysis at a series of workshops held over the past year and a half at CIMMYT’s Izmir and Ankara offices in Turkey.

“The University of Barcelona has developed expertise on this technique, which involves taking images of wheat plots from above using a remote control provided by a mobile app, and extracting data from this images using image analysis software,” explained Nehe.

The technique has shown promising results for throughput field phenotyping, which involves characterizing a plant’s physical and biological properties.

Despite leaving CIMMYT in October, Nehe hopes to continue collaborating with CIMMYT in the future. His current plans involve bridging the gap between international research institutes and local grassroots NGOs to solve the problems of smallholder farmers in rural India. He is planning to establish a project in collaboration with the Paani Foundation, a local NGO and international knowledge partners like the Borlaug Institute for South Asia (BISA) on the area of sweet sorghum biofuel production technology. The project will combine bio-economic modelling and GIS techniques to help in crop management. 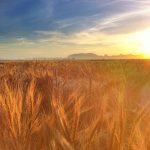 Written by mmacneil on December 9, 2019. Posted in News, Videos

This week, the world’s eyes are upon global leaders gathered in Madrid for COP25 to negotiate collective action to slow the devastating impacts of climate change.

According to the UN, the world is heading for a 3.2 degrees Celsius global temperature rise over pre-industrial levels, leading to a host of destructive climate impacts including hotter and drier environments and more extreme weather events. Under these more extreme conditions, the world’s staple food crops are under threat.

A new video highlights the work of the Heat and Drought Wheat Improvement Network (HeDWIC), a global research and capacity building network under the Wheat Initiative, that harnesses the latest technologies in crop physiology, genetics and breeding to help create new climate-resilient wheat varieties. With the help of collaborators and supporters from around the world,  HeDWIC takes wheat research from the theoretical to the practical by incorporating the best science into real-life breeding scenarios. 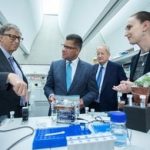 New £38 million funding from the Department for International Development (DFID, or UK aid), with additional funding from the Bill & Melinda Gates Foundation, will allow scientists to research cutting-edge technology to protect crops from pests and diseases and produce new varieties that are climate-resilient.

The joint funding, which was announced on Monday October 7, will directly contribute to securing global food security against pest and disease threats, climate change and natural resource scarcity. It will also reduce poverty in sub-Saharan Africa and South Asia by improving agricultural productivity of smallholder farmers.

The partnership will support  biotechnologies to enable crops to convert sunlight and carbon dioxide more efficiently to promote higher yields,  tools and methods to reduce the impact of root crop diseases in West Africa, and work  to harness naturally occurring biological nitrogen fixation processes to improve crops’ nitrogen uptake and increase yields while reducing fertilizer use among smallholder farmers in Africa.

At a visit to the Sainsbury Lab at the University of Cambridge on Monday, UK International Development Secretary Alok Sharma and Bill Gates participated in a demonstration of Mobile and Real-time PLant disEase) (MARPLE) Diagnostics, a mobile rust-testing lab developed by the John Innes Centre, the International Maize and Wheat Improvement Center (CIMMYT), and the Ethiopian Institute of Agricultural Research. The suitcase sized mobile lab can identify strains of wheat rust disease in just 48 hours – a process that normally takes months.

Early last year DFID also announced funding for CGIAR to help scientists identify specific genes in crops related to improved nutrition, faster growth and disease and climate-resilience. Their work will help up to 100 million African farmers and their families lift themselves out of poverty.

The full press release by the Department for International Development and The Rt Hon Alok Sharma MP is available on the GOV.UK website. 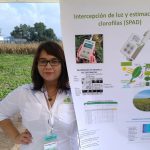 Written by adoody on September 19, 2019. Posted in Article, News

The International Maize and Wheat Improvement Center (CIMMYT’s) own Lucia Nevescanin Moreno is the first recipient of a new scholarship sponsored by the Heat and Drought Wheat Improvement Consortium (HeDWIC) for its doctoral training program.

The HeDWIC Doctoral Training Program evolved out of the MasAgro-Trigo project, thanks to funding from the Mexican Secretariat of Agriculture and Rural Development (SADER) and National Council for Science and Technology (Consejo Nacional de Ciencia y Tecnología, CONACYT). The idea of the initiative is to provide young scientists from climate or food security vulnerable regions with opportunities to conduct research at advanced institutes internationally, to boost heat and drought tolerance of wheat in their home country. The program is expected to expand to other climate vulnerable regions through similar efforts to train talented young scientists who wish to be involved in improving the climate resilience of crops.

Lucia, who is currently working as an assistant research associate with CIMMYT, will be pursuing a PhD on wheat root function under abiotic stress under the supervision of University of Nottingham professor of Plant Sciences Malcom Bennett starting in October.

We asked Lucia a few questions about her research and the importance of heat and drought resilience.

How did you hear about CIMMYT?

A professor from my master’s program told me about it. I was doing a master’s in Natural Resources in the Instituto Tecnologico de Sonora, working specifically on tropical dry forest in Northwest Mexico but I always wanted to do science in a more applied way. I wanted to work on something that could help other people. Food security is something that people need to pay a lot of attention to. I started working for CIMMYT in February 2018 as an assistant research associate in the Global Wheat Program, conducting experiments in different conditions and I really learned a lot and am still learning a lot.

How did you hear about HeDWIC?

I was working with [CIMMYT Remote Sensing Specialist] Francisco Pinto on wheat root research here at CIMMYT and he asked me if I wanted to continue with my studies. I told him that I wanted to do a PhD and he showed me this opportunity with HeDWIC and the University of Nottingham. So I applied and I got it. Actually, I was very surprised to learn that I am the first PhD recipient of the HeDWIC scholarship. It’s a lot of pressure!

What will you be working on?

Why do you think a consortium like HeDWIC is important for food security?

With climate change occurring at such a rapid pace, we really need to adapt to these new conditions. The population is also growing and so the demand for food needs serious attention. In HeDWIC they are working with external conditions like drought and heat and they are looking at how crops can adapt to these conditions. I think that just looking at how to increase yield is not enough, we need to look at how the crop will respond in the different environmental conditions we will go through.

What advice would you give to young women interested in a career in science?

I think it’s more difficult for women to adapt to this environment of work but we just need to be brave and show that we can do it! I was really interested in working in science because I wanted to know how things work and why. Maybe with my research and with research in general we can help people in power to make important decisions that can help other people. I think that should be the principle purpose of science.

Lucia’s PhD is supported by the CONACYT-Government of Mexico, SADER’s MasAgro Trigo and the University of Nottingham.