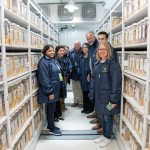 It was 1974.  In the United States, the environmental movement was in full swing, with the first celebration of Earth Day, the establishment of the Environmental Protection Agency, and the publication of Rachel Carson’s revolutionary book, Silent Spring. Around the world, the public was gaining awareness of the danger of overuse of pesticides, as a small group of crop breeders and entomologists decided to get together in what would become the first International Plant Resistance to Insects (IPRI) workshop.

Today, the need for insect resistance is even greater. The UN, which has named 2020 as the International Year of Plant Health, estimates that almost 40% of food crops are lost annually due to plant pests and diseases. The losses due to insects total up to $1billion a year for wheat alone.  Climate change is another factor affecting the population and geographical distribution of pests.

A recurring theme was the importance of collaboration between entomologists and breeders to ensure breakthroughs in resistance genes are taken up to develop new varieties that reach farmers.

“There is a disconnect between screening and breeding,” CIMMYT Global Wheat Program Director Hans Braun told attendees.  “We need more and better collaboration between disciplines, to move from screening to breeding faster.”

Communicating to farmers is crucial. Pesticides are expensive, harmful to both human health and the environment, and can lead to crop resistance.  However, they can appear to be the quick and easy solution. “IPM also means ‘integrating people’s mindsets,’” said B.M. Prasanna, director of CIMMYT’s Global Maize Program.

National policies instituting strict quarantines pose another serious barrier to the exchange of seeds required for testing and research.

To mark the workshop’s 24th anniversary, Michael Smith, entomologist at Kansas State University and longtime IPRI participant, offered a brief history of the event and the field—from the first insect-resistant wheat developed in the early 1920s to the wake-up call of pesticide abuse in the 1960s.

“We’ve grown, we’ve made enormous technological changes, but ‘talking to people’ is still what we’re here for,” he stated. He added a challenge for his colleagues:  “We need to tell a better story of the economic benefits of our science. We need to get to the table in an even more assertive way.”

He also shared some lighter memories, such as the sight of imminent plant scientists relaxing in leisure suits at the 1978 session. A traditional mariachi serenade and traditional Mexican cuisine ensured that more memories were made in 2020.

“The ultimate objective is to reduce the use of pesticides,” he said, adding: “How do we get this research out of the lab and into the field?” 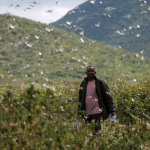 This op-ed by Dr. Nteranya Sanginga from the International Institute of Tropical Agriculture (IITA), featuring research by the International Maize and Wheat Improvement Center (CIMMYT), was originally published by Thomson Reuters Foundation News.

A perfect storm of conditions led to the locust attack currently tearing through East Africa and Pakistan, where countries are deploying pesticides, military personnel and even ducks.

The UN’s Food and Agriculture Organisation (FAO) has given the ultimatum of March to bring Africa’s desert locust outbreak under control, calling for US$76 million to fund insecticide spraying.

But the ongoing outbreak is only the latest example of the devastation that crop pests can cause – there are tens of thousands more that farmers have to contend with, from diseases and fungi to weeds and insects.

And with such a variety of threats to harvests and yields, there is no silver bullet to protect against losses and damage. Rather, an integrated approach is needed that incorporates all available tools in the toolbox, from better forecasting and monitoring technologies to the controlled spraying of crops with biocontrol products, all supported by stronger partnerships.

Smallholder farmers are on the frontline when a pest outbreak takes hold. A small swarm of desert locusts can eat the equivalent food of 35,000 people per day, for example, while crop losses resulting from the spread of fall armyworm across sub-Saharan Africa are estimated to cost up to $6.1 billion a year.

Yet while their livelihoods are most at risk, smallholders can also play a significant part in tackling crop pests like the desert locust.

By giving farmers access to better surveillance technology that enables them to monitor pests and forecast potential outbreaks, infestations can be tracked and managed effectively.

A project in Bangladesh that helps farmers to deal with fall armyworm is one example of how this can be done effectively. Led by the International Maize and Wheat Improvement Center (CIMMYT), the initiative has trained hundreds of farmers and extension agents in identifying, monitoring and tackling infestations using combined approaches.

Yet effective pest management is not the responsibility of farmers alone – nor does it begin in the field. Behind every farmer dealing with a crop pest is a scientist who has supported them by developing better seeds, crop protection methods and scouting apps to identify weeds.

CGIAR researchers from the International Center for Tropical Agriculture (CIAT) developed and released a modified cassava variety in Colombia, bred to be resistant against high whitefly, which outperformed regional varieties without the need for pesticides.

The International Institute of Tropical Agriculture (IITA) has also developed maize varieties resistant to the stem borer insect for use in West and Central Africa.

And last year, the Nigerian Biosafety Management Agency approved the commercial release of genetically modified cowpea to farmers – a variety resistant to the maruca pod borer, a type of insect.

Better seeds and crop protection products are vital – but we need to do still more.

Some biocontrol pesticides such as Green Muscle and Novacrid have been highly effective in the past if used against locust hopper bands before they congregate into swarms. But they have limited impact once the swarms start to move as well as limited availability and regulatory approval, and a relatively short shelf-life.

Further research into crop protection methods will pave the way for new chemical and biological solutions, which can keep pest outbreaks under control – or prevent them altogether.

But we also need closer collaboration with governments, research institutions, universities, donors and investors, and – crucially – farmers to address the challenges of pest infestations, and lessen their impact on food systems.

Collaboration is central to IITA’s Biorisk Management Facility (BIMAF), a partnership established around the need for better coordination between researchers, civil society, farming communities, and non-governmental, public and private organisations.

There is no single, superior way to fight and control agricultural pests like the desert locust – battling them on all fronts is our best hope. Of course, prevention is the ultimate goal, and it is achievable. But stopping an outbreak in its tracks requires a huge amount of coordination and sustained financial support.

We must work together to develop new crop protection methods and get them into the hands of those who need them the most. The current locust outbreak – and future pest infestations – will only be defeated with a united front. 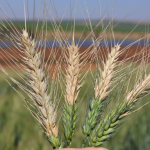 The Meeting of Agricultural Chief Scientists (MACS), which took place on April 25-26 in Tokyo, focused on identifying global research priorities in agriculture and ways to facilitate collaboration among G20 members and with relevant stakeholders.  The purpose is to develop a global agenda ahead of the May 11-12 meeting of G20 Agricultural Ministers.

“It is essential to advocate for science-based decision making,” he said. “Better connecting the dots between national agricultural research agendas and the CGIAR international agenda is important. The G20 wheat initiative and WHEAT have made a good start.”

The threat of pests and the importance of adopting climate smart technology came up as high priorities.

Transboundary pests have become a serious threat to food security, exacerbated by the globalized movement of people and commodities and the changing climate. As Kommerell commented to the attendees, pathogens and pests cause global crop losses of 20 to 30 percent. This has a “double penalty” effect, wasting both food and resources invested in farming inputs.

The International Maize and Wheat Improvement Center (CIMMYT) is particularly focused on pests and diseases threatening maize and wheat, such as Fall armyworm and wheat rust and blast.  Kommerell summarized a number of research-based solutions underway thanks to international collaboration – including building globally-accessible rapid screening facilities and using wild crop relatives as a genetic source for resistance. But non-technical solutions, such as boosting awareness and communicating preventative farming practices are also important.

The agricultural field is especially vulnerable to the effects of changing climate and weather variability, while at the same time heavily contributing as a source of greenhouse gases. Innovative agricultural technologies and practices are essential for sustainable production, climate resilience and carbon sequestration as well as reducing greenhouse gas emissions.

The key, the attendees concluded in a meeting communiqué, is the open and international exchange of knowledge, experience, and practices. Networks are already in place, but need strengthening at both the regional and international level.

To that end, a task force led by Australia and the United States will develop guidelines for working groups and initiatives designed to mitigate pests and scale adoption of climate smart technologies.

The government of Japan is also taking an active role, with plans to hold international conferences this year to facilitate sharing of experiences, research, and best practices from G20 countries.