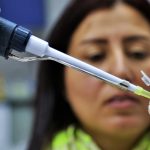 Why to invest more in women and girls in science

This article was originally posted on the International Center for Biosaline Agriculture (ICBA) website.

11 February is celebrated worldwide every year as the International Day of Women and Girls in Science. This year’s theme is “Investment in Women and Girls in Science for Inclusive Green Growth”. The day serves to highlight the important role women and girls play in science and technology and the crucial contributions they make to the achievement of the 2030 Agenda for Sustainable Development.

As UN Secretary-General António Guterres aptly notes, the challenges of the 21st century require that everyone’s full potential is harnessed, which in turn means that gender stereotypes should be dismantled and the gender imbalance in science ended.

However, statistics show that women and girls are still largely underrepresented in science, technology, engineering and mathematics (STEM) around the world as a result of wide-ranging factors. According to the United Nations Educational, Scientific and Cultural Organization (UNESCO), only about 30 percent of the women students in higher education globally choose STEM-related disciplines. What is more, women students’ enrollment in such fields as information and communications technology and natural science, mathematics and statistics stands at just 3 percent and 5 percent respectively.

A World Bank report points out that the percentage of women students in STEM in the Middle East and North Africa (MENA) countries is comparable to or in some cases higher than in more developed countries. This, nonetheless, does not necessarily translate into higher numbers of women in the STEM professions.

Empirical evidence also shows that there is a disproportionately low number of women in science. The average share of women scientists across the region stands at 17 percent, which is the lowest in the world.

Women also account for just 21 percent of the total labor force and contribute 18 percent to the region’s overall GDP. If the labor gender gap had been narrowed over the past decade, the GDP growth rate in the region could have doubled or increased by some 1 trillion USD in cumulative output. This is a huge missed economic opportunity.

There are also other implications of women’s underrepresentation in the labor force, especially in research and development. Many studies demonstrate that gender-balanced teams improve innovation and productivity and that women are critical to innovation. Science is also more likely to be breakthrough as a larger number of women researchers in teams facilitates greater creativity and innovative thinking.

Not only are women great innovators, but they are also excellent leaders. Research shows that the more women there are in senior management, the better organizations perform. This is particularly true of organizations that are focused on innovation.

Bringing more women into science and helping them realize their full potential is a sure way to boost research and innovation in the region, as well as social and economic development.

This is one of the reasons why the International Center for Biosaline Agriculture (ICBA) offers a wide range of opportunities to women and girls in science.

To date ICBA has implemented several initiatives to support women and girls in science in the MENA region. The latest one is the Arab Women Leaders in Agriculture (AWLA) program. Being the first of its kind in the region, AWLA is a leadership program aimed at empowering women researchers who can make a positive impact in their workplaces, communities and countries. The program is designed to bring together women researchers from different countries to spearhead positive changes in agriculture while addressing the challenges they face in their careers. AWLA is funded by the  Bill & Melinda Gates Foundation, the Islamic Development Bank (IsDB) and the CGIAR Research Program on Wheat. The inaugural cohort of AWLA includes 22 women scientists from Algeria, Egypt, Jordan, Lebanon, Morocco and Tunisia.

Another initiative is a research grant program implemented jointly with the CRDF Global. It helped four Arab women scientists to conduct advanced research in collaboration with leading US scientists.

The center also works to ensure women’s equal participation in training programs, fellowships and internships. In 2019, for example, 36 out of 53 interns and 104 out of 212 participants at training programs were women.

As women-led contributions to different sectors are becoming more and more evident, tapping their knowledge and potential today will set the world on course for a more sustainable and prosperous future.

As Ms. Michelle Bachelet, former Executive Director of UN Women, once said: “When women are empowered and can claim their rights and access to land, leadership, opportunities and choices, economies grow, food security is enhanced, and prospects are improved for current and future generations.”