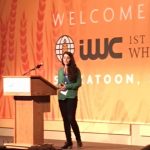 Written by mmacneil on August 9, 2019. Posted in Event, News

As many regions worldwide baked under some of the most persistent heatwaves on record, scientists at a major conference in Canada shared data on the impact of spiraling temperatures on wheat.

In the Sonora desert in northwestern Mexico, nighttime temperatures varied 4.4 degrees Celsius between 1981 and 2018, research from the International Maize and Wheat Improvement Center (CIMMYT) shows. Across the world in Siberia, nighttime temperatures rose 2 degrees Celsius between 1988 and 2015, according to Vladimir Shamanin, a professor at Russia’s Omsk State Agrarian University who conducts research with the Kazakhstan-Siberia Network on Spring Wheat Improvement.

“Although field trials across some of the hottest wheat growing environments worldwide have demonstrated that yield losses are in general associated with an increase in average temperatures, minimum temperatures at night – not maximum daytime temperatures –are actually determining the yield loss,” said Gemma Molero, the wheat physiologist at CIMMYT who conducted the research in Sonora, in collaboration with colleague Ivan Ortiz-Monasterio.

“Of the water taken up by the roots, 95% is lost from leaves via transpiration and from this, an average of 12% of the water is lost during the night. One focus of genetic improvement for yield and water-use efficiency for the plant should be to identify traits for adaptation to higher night temperatures,” Molero said, adding that nocturnal transpiration may lead to reductions of up to 50% of available soil moisture in some regions.

The Intergovernmental Panel on Climate Change (IPCC) reported in October that temperatures may become an average of 1.5 degrees Celsius warmer in the next 11 years. A new IPCC analysis on climate change and land use due for release this week, urges a shift toward reducing meat in diets to help reduce agriculture-related emissions from livestock. Diets could be built around coarse grains, pulses, nuts and seeds instead.

Scientists attending the International Wheat Congress in Saskatoon, the city at the heart of Canada’s western wheat growing province of Saskatchewan, agreed that a major challenge is to develop more nutritious wheat varieties that can produce bigger yields in hotter temperatures.

As a staple crop, wheat provides 20% of all human calories consumed worldwide. It is the main source of protein for 2.5 billion people in the Global South. Crop system modeler Senthold Asseng, a professor at the University of Florida and a member of the International Wheat Yield Partnership, was involved in an extensive study  in China, India, France, Russia and the United States, which demonstrated that for each degree Celsius in temperature increase, yields decline by 6%, putting food security at risk.

Wheat yields in South Asia could be cut in half due to chronically high temperatures, Molero said. Research conducted by the University of New South Wales, published in Environmental Research Letters also demonstrates that changes in climate accounted for 20 to 49% of yield fluctuations in various crops, including spring wheat. Hot and cold temperature extremes, drought and heavy precipitation accounted for 18 to 4% of the variations.

At CIMMYT, wheat breeders advocate a comprehensive approach that combines conventional, physiological and molecular breeding techniques, as well as good crop management practices that can ameliorate heat shocks. New breeding technologies are making use of wheat landraces and wild grass relatives to add stress adaptive traits into modern wheat – innovative approaches that have led to new heat tolerant varieties being grown by farmers in warmer regions of Pakistan, for example.

Matthew Reynolds, a distinguished scientist at CIMMYT, is joint founder of the Heat and Drought Wheat Improvement Consortium (HeDWIC), a coalition of hundreds of scientists and stakeholders from over 30 countries.

“HeDWIC is a pre-breeding program that aims to deliver genetically diverse advanced lines through use of shared germplasm and other technologies,” Reynolds said in Saskatoon. “It’s a knowledge-sharing and training mechanism, and a platform to deliver proofs of concept related to new technologies for adapting wheat to a range of heat and drought stress profiles.”

Aims include reaching agreement across borders and institutions on the most promising research areas to achieve climate resilience, arranging trait research into a rational framework, facilitating translational research and developing a bioinformatics cyber-infrastructure, he said, adding that attracting multi-year funding for international collaborations remains a challenge.

Another area of climate research at CIMMYT involves the development of an affordable alternative to the use of nitrogen fertilizers to reduce planet-warming greenhouse gas emissions. In certain plants, a trait known as biological nitrification inhibition (BNI) allows them to suppress the loss of nitrogen from the soil, improving the efficiency of nitrogen uptake and use by themselves and other plants.

Scientists with the BNI research consortium, which includes Japan’s International Research Center for Agricultural Sciences (JIRCAS), propose transferring the BNI trait from those plants to critical food and feed crops, such as wheat, sorghum and Brachiaria range grasses.

“Every year, nearly a fifth of the world’s fertilizer is used to grow wheat, yet the crop only uses about 30% of the nitrogen applied, in terms of biomass and harvested grains,” said Victor Kommerell, program manager for the multi-partner CGIAR Research Programs (CRP) on Wheat and Maize led by the International Maize and Wheat Improvement Center.

“BNI has the potential to turn wheat into a highly nitrogen-efficient crop: farmers could save money on fertilizers, and nitrous oxide emissions from wheat farming could be reduced by 30%.”

Excluding changes in land use such as deforestation, annual greenhouse gas emissions from agriculture each year are equivalent to 11% of all emissions from human activities. About 70% of nitrogen applied to crops in fertilizers is either washed away or becomes nitrous oxide, a greenhouse gas 300 times more potent than carbon dioxide, according to Guntur Subbarao, a principal scientist with JIRCAS.

Although ruminant livestock are responsible for generating roughly half of all agricultural production emissions, BNI offers potential for reducing overall emissions, said Tim Searchinger, senior fellow at the World Resources Institute and technical director of a new report titled “Creating a Sustainable Food Future: A Menu of Solutions to Feed Nearly 10 Billion People by 2050.”

To exploit this roots-based characteristic, breeders would have to breed this trait into plants, said Searchinger, who presented key findings of the report in Saskatoon, adding that governments and research agencies should increase research funding.

Other climate change mitigation efforts must include revitalizing degraded soils, which affect about a quarter of the planet’s cropland, to help boost crop yields. Conservation agriculture techniques involve retaining crop residues on fields instead of burning and clearing. Direct seeding into soil-with-residue and agroforestry also can play a key role.