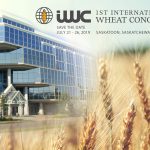 More than 800 global experts will gather in Saskatoon to strategize on ways to meet projected nutritional needs of 60% more people by 2050.

SASKATOON, Canada (CIMMYT) — Amid global efforts to intensify the nutritional value and scale of wheat production, scientists from all major wheat growing regions in the world will gather from July 21 to 26, 2019 at the International Wheat Congress in Saskatoon, the city at the heart of Canada’s western wheat growing province, Saskatchewan. The CGIAR Research Program on Wheat (WHEAT), led by the International Maize and Wheat Improvement Center (CIMMYT), is a founding member of the G20 Wheat Initiative, a co-host of the conference.

Wheat provides 20% of all human calories consumed worldwide. In the Global South, it is the main source of protein and a critical source of life for 2.5 billion people who live on less than $2 (C$2.60) a day.

In spite of its key role in combating hunger and malnutrition, the major staple grain faces threats from climate change, variable weather, disease, predators and many other challenges. Wheat’s vital contribution to the human diet and farmer livelihoods makes it central to conversations about the rural environment, agricultural biodiversity and global food security.

More than 800 delegates, including researchers from the CGIAR Research Program on Wheat, CIMMYT, the International Center for Agricultural Research in the Dry Areas (ICARDA), the International Wheat Yield Partnership (IWYP), Cornell University’s Delivering Genetic Gain in Wheat project (DGGW), the University of Saskatchewan and many other organizations worldwide will discuss the latest research on wheat germplasm.

“We must solve a complex puzzle,” said Martin Kropff, CIMMYT’s director general. “Wheat must feed more people while growing sustainably on less land. Wheat demand is predicted to increase 60% in the next three decades, while climate change is putting an unprecedented strain on production.”

The congress is the first major gathering of the wheat community since the 2015 International Wheat Conference in Sydney, Australia.

CGIAR and CIMMYT scientists will share the latest findings on:

For more details on schedule and scientists’ presentations, click here.

Research shows that more than 60% of wheat varietal releases since 1994 were CGIAR-related.

Low- and middle-income countries are the primary focus and biggest beneficiaries of CGIAR wheat research, but high-income countries reap substantial rewards as well. In Canada, three-quarters of the wheat area is sown to CGIAR-related cultivars and in the United States almost 60% of the wheat area was sown to CGIAR-related varieties, according to the research.

About CGIAR: CGIAR is a global research partnership for a food secure future dedicated to reducing poverty, enhancing food and nutrition security, and improving natural resources.

About the CGIAR Research Program on Wheat: Joining advanced science with field-level research and extension in lower- and middle-income countries, the Agri-Food Systems CGIAR Research Program on Wheat (WHEAT) works with public and private organizations worldwide to raise the productivity, production and affordable availability of wheat for 2.5 billion resource-poor producers and consumers who depend on the crop as a staple food. WHEAT is led by the International Maize and Wheat Improvement Center (CIMMYT), with the International Center for Agricultural Research in the Dry Areas (ICARDA) as a primary research partner. Funding for WHEAT comes from CGIAR and national governments, foundations, development banks and other public and private agencies, in particular the Australian Centre for International Agricultural Research (ACIAR), the UK Department for International Development (DFID) and the United States Agency for International Development (USAID). www.wheat.org

About CIMMYT: The International Maize and Wheat Improvement Center (CIMMYT) is the global leader in publicly funded maize and wheat research and related farming systems. Headquartered near Mexico City, CIMMYT works with hundreds of partners throughout the developing world to sustainably increase the productivity of maize and wheat cropping systems, thus improving global food security and reducing poverty. CIMMYT is a member of CGIAR and leads the CGIAR Research Programs on Maize and Wheat, and the Excellence in Breeding Platform. The center receives support from national governments, foundations, development banks and other public and private agencies.