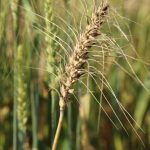 What is wheat blast?

Written by adoody on January 3, 2020. Posted in Article, News

This article by Matthew O’ Leary was originally posted on the CIMMYT website.

Wheat blast is a fast-acting and devastating fungal disease that threatens food safety and security in tropical areas in South America and South Asia. Directly striking the wheat ear, wheat blast can shrivel and deform the grain in less than a week from the first symptoms, leaving farmers no time to act.

The disease, caused by the fungus Magnaporthe oryzae pathotype triticum (MoT), can spread through infected seeds and survives on crop residues, as well as by spores that can travel long distances in the air.

Magnaporthe oryzae can infect many grasses, including barley, lolium, rice, and wheat, but specific isolates of this pathogen generally infect limited species; that is, wheat isolates infect preferably wheat plants but can use several more cereal and grass species as alternate hosts. The Bangladesh wheat blast isolate is being studied to determine its host range. The Magnaporthe oryzae genome is well-studied but major gaps remain in knowledge about its epidemiology.

Where is wheat blast found?

First officially identified in Brazil in 1985, the disease is widespread in South American wheat fields, affecting as much as 3 million hectares in the early 1990s. It continues to seriously threaten the potential for wheat cropping in the region.

In 2016, wheat blast spread to Bangladesh, which suffered a severe outbreak. It has impacted around 15,000 hectares of land in eight districts, reducing yield on average by as much as 51% in the affected fields.

How does blast infect a wheat crop?

Wheat blast spreads through infected seeds, crop residues as well as by spores that can travel long distances in the air.

Blast appears sporadically on wheat and grows well on numerous other plants and crops, so rotations do not control it. The irregular frequency of outbreaks also makes it hard to understand or predict the precise conditions for disease development, or to methodically select resistant wheat lines.

At present blast requires concurrent heat and humidity to develop and is confined to areas with those conditions. However, crop fungi are known to mutate and adapt to new conditions, which should be considered in management efforts.

How can farmers prevent and manage wheat blast?

There are no widely available resistant varieties, and fungicides are expensive and provide only a partial defense. They are also often hard to obtain or use in the regions where blast occurs, and must be applied well before any symptoms appear — a prohibitive expense for many farmers.

The Magnaporthe oryzae fungus is physiologically and genetically complex, so even after more than three decades, scientists do not fully understand how it interacts with wheat or which genes in wheat confer durable resistance.

Researchers from the International Maize and Wheat Improvement Center (CIMMYT) are partnering with national researchers and meteorological agencies on ways to work towards solutions to mitigate the threat of wheat blast and increase the resilience of smallholder farmers in the region. Through the USAID-supported Cereal Systems Initiative for South Asia (CSISA) and Climate Services for Resilient Development (CSRD) projects, CIMMYT and its partners are developing agronomic methods and early warning systems so farmers can prepare for and reduce the impact of wheat blast.