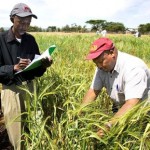 Written by Darell Sison on August 27, 2013. Posted in Articles, News

Efforts to put wheat on the food and trade agenda in Africa recently came together at the Forum for Agricultural Research in Africa (FARA) meeting in Accra during 15–20 July 2013, when senior research, development, and policy experts met with representatives of CGIAR’s WHEAT research program to develop a strategy for promoting African wheat production.

Wheat was not a traditional staple in much of Africa, but urbanization, a growing middle class, and changing lifestyles are driving a rapid increase in demand for it. The urban and rural poor in Africa eat wheat, as do more prosperous consumers, and demand is burgeoning with rising populations. But leading wheat producing countries in Africa grow enough to meet at most 40% of their demand, so the continent imports more than US$ 15 billion-worth of grain each year.

Efforts to put wheat on the food and trade agenda in Africa recently came together at the Forum for Agricultural Research in Africa (FARA) meeting in Accra during 15–20 July 2013, when senior research, development, and policy experts met with representatives of CGIAR’s WHEAT research program to develop a strategy for promoting African wheat production. “The idea is to put together all the actors—the production side, the legislation, the demand and markets,” said Victor Kommerell, manager of the CIMMYT-led WHEAT Program. “Initially the strategy should focus on gathering more evidence of production and market potential, particularly regarding smallholder farmers’ chances to grow wheat as a cash crop, and then looking at future consumption and regional trade.”

The connections made at FARA in July followed the release of a key study in late 2012 at the ground-breaking conference Wheat for Food Security in Africa in Addis Ababa. Shortly after that conference, African Union agriculture ministers endorsed wheat as a strategic crop for Africa. Their heads of government, at African Union level, endorsed this a few months later.

“As a rough-and-ready estimate, most countries are fulfilling less than a quarter of their wheat production potential,” said CIMMYT socioeconomist Bekele Shiferaw, a key author of the wheat study. “There are many opportunities both to expand the area devoted to wheat and to increase yields from existing acreage.”

According to Shiferaw, this will require a fundamental change in the way participants look at the entire wheat value chain—from farm to market and from government office to donor boardroom. More research is needed on potential constraints on improved wheat production, including issues related to markets, land, labor, and how food aid is distributed.

Challenges affecting farming at different scales in different country contexts must be carefully considered—from small farms’ lack of mechanization, labor, and access to markets, to problems that have undermined large-scale wheat farming projects in Africa in the past. The aim is to ensure the best mix of small, medium, and large farms, as well as fitting options to the differing conditions of high- versus low-population density nations and current highland wheat-growing areas. The 2012 study focused on rainfed wheat, according to Kommerell. Irrigated wheat also has great potential—and unique challenges—in Africa. Release of a report by WHEAT on irrigated wheat for Africa is planned for September 2013.