WHEAT research has targeted wheat-growing regions where 90% of people earn less than $2 a day. Against the backdrop of increasingly virulent biotic stresses, less water, more erratic rainfall and rising temperatures, longstanding wheat breeding research by CIMMYT, ICARDA, and their global network of partners has reduced poverty by raising farm profits and farmer income.

This work helps to maintain stable and affordable prices for wheat grain for the poor whose diets depend on wheat, and focuses on national policies that foster more productive and food-secure rural communities.

“One of the most direct ways that disasters affect agriculture is through lower-than-expected production. This causes direct economic loss to farmers which can cascade along the entire value chain.”

Damage and Loss: Agriculture on the Proving Grounds, a 10-year Food and Agriculture Organization of the United Nations (FAO) report.

A 2003 CIMMYT study showed that a 10% increase in cultivation of high-yielding varieties of major crops, including wheat, was associated with a 10-15% increase in per capita GDP, reduced fertility and mortality. This research not only proves the effectiveness of CGIAR’s work in the past, but also helped shape WHEAT’s research priorities over the last 10 years. By fostering the production and distribution of new, high-yielding and stress-tolerant varieties, WHEAT has contributed to poverty alleviation around the globe.

A 2018 study suggests that investments in breeding high-yielding varieties was one of the most successful forms of foreign aid to developing countries for half a century, further justifying continued investment in staple crop research programs: Two Blades of Grass: The Impact of the Green Revolution.

A 2013 research showed that, without the contributions of CGIAR crop genetic improvement in the developing world, wheat production in 2004 would have been 43-60% lower than observed, driving up the average price of wheat by 29-59%: Green Revolution research saved an estimated 18 to 27 million hectares from being brought into agricultural production.

A 2016 report showed that varieties on nearly half the world’s wheat lands — as well as 70-80% of all wheat in South Asia, Central and West Asia, and North Africa — carry genetic contributions from CGIAR research and partnerships. Conservative estimates of the yearly economic benefits in added wheat grain from this work ranged from $2.2 – $3.1 billion dollars in 2010, besides helping to maintain stable wheat prices that benefit poor consumers: Impacts of International Wheat Improvement Research. The impact of quick responses to wheat diseases such as wheat rust and blast has reduced the risk of global pandemics and averted major potential food shortages worldwide. Working with international partners, WHEAT has improved the surveillance, diagnostics, and response to wheat diseases, and developed and delivered disease-resistant varieties to farmers every year. This prepared and proactive approach helped to protect smallholder incomes around the world.

9% of crop & livestock production loss in least developed and lower-middle income countries is traced to pests and disease. 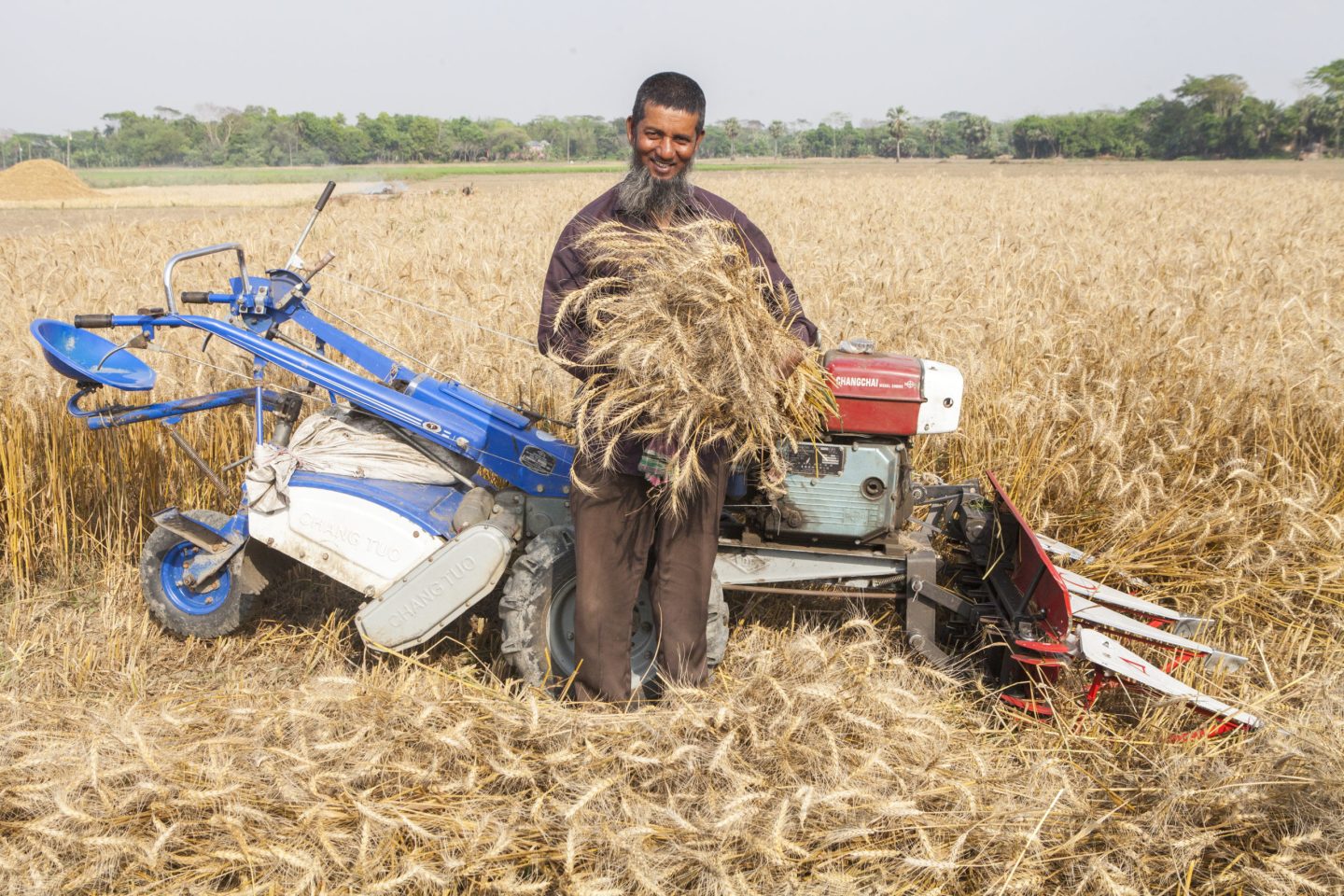 How tools and mechanization can improve income opportunities and livelihoods

WHEAT and partners developed, refined and deployed appropriate-scale mechanization solutions that mitigated labor shortages and built capacity across continents. Research revealed that smallholder demand for machinery was higher than previously realized, and that WHEAT projects in Africa, South Asia and Latin America improved livelihoods and income opportunities for farmers.

If the Nutrient Expert Tool were used in all rice and wheat acreage in India, we would see...