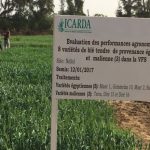 MONTPELLIER, France (June 5, 2017) – The 2017 Olam Prize for Innovation in Food Security was awarded to the “Adapting durum wheat varieties to the Senegal Basin for food security” project led by Filippo Maria Youssef Bassi, durum wheat breeder at the International Center for Agricultural Research in the Dry Area (ICARDA). 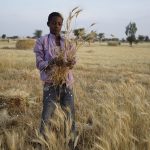 Moving zinc-enriched wheat into the mainstream

Written by Ricardo Lopez on May 30, 2017. Posted in Article, Articles, Media, News

EL BATAN, Mexico (May 30,2017)– In an effort to stamp out hidden hunger, scientists are calling for support to make zinc-biofortification a core trait in the world’s largest wheat breeding program.

At least 2 billion people around the world suffer from micronutrient deficiency, or hidden hunger, which is characterized by iron-deficiency anemia, vitamin A and zinc deficiency. 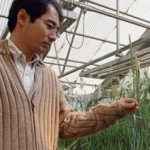 Nitrogen-efficient crops on the horizon: Can we grow more with fewer emissions?

Written by Ricardo Lopez on May 19, 2017. Posted in Article, Articles, Media, News

EL BATAN, Mexico (May 17, 2017) – Through a natural, affordable alternative to farmers’ heavy use of nitrogen fertilizers, science now offers an option to boost crop productivity and dramatically reduce greenhouse gas emissions, according to the authors of a report that will appear this week in the journal Plant Science.

The new study describes certain plants that possess a trait known as biological nitrification inhibition (BNI), by which they suppress the loss of nitrogen (N) from the soil and improve the efficiency of its uptake and use by themselves and other plants.

The authors, who form part of a new BNI research consortium, propose transferring the BNI trait from those plants to critical food and feed crops, such as wheat, sorghum and Brachiaria range grasses.

“Nearly a fifth of the world’s fertilizer, for example, is deployed each year to grow wheat and the crop only uses about 30 percent of the nitrogen applied,” according to Guntur Subbarao, a researcher with Japan’s International Research Center for Agricultural Sciences (JIRCAS) and lead author of the study. 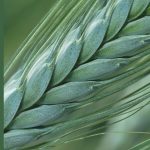 Written by Ricardo Lopez on May 15, 2017. Posted in Article, Articles, Media, News

MONTPELLIER, France (May 15, 2017) – CGIAR has launched a new portfolio of research programs designed to reduce by 150 million the number of people who do not have enough food to eat in developing nations. By transforming agricultural and food systems, the CGIAR Portfolio 2017-2022 is the second generation of CGIAR’s Research Programs and Platforms aimed at reducing rural poverty, improving food and nutrition security and improving natural resources and ecosystem services. 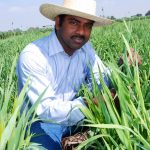 MEXICO CITY, Mexico (February 2, 2017) — Reductions of spike-ethylene, a plant-aging hormone, could increase wheat yields by 10 to 15 percent in warm locations, according to a recent study published in New Phytologist journal.

Ethylene is usually produced by plants at different developmental stages and can cause a wide range of negative effects on plant growth and development.

When hot weather hits a wheat field an increase in ethylene levels can lessen the amount of grains produced on ears or spikes by limiting the export of carbohydrates to pollen development.